SEOUL, (AFP) - US and South Korean troops will consider scaling down a planned joint sea drill after a US aircraft carrier joined rescue and recovery efforts in Japan, officials said Monday.

The aircraft carrier Ronald Reagan and its strike group arrived Sunday off Japan's northeast coast devastated by the earthquake and tsunami that is feared to have killed more than 10,000. 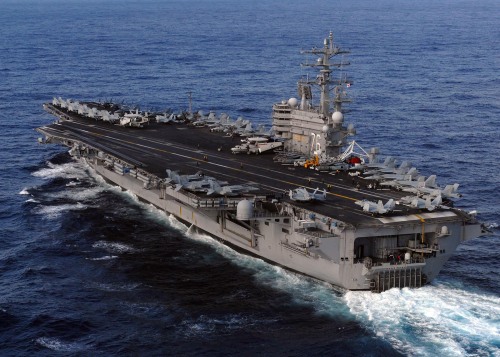 US officials said they were discussing whether to downsize the major joint sea drill with South Korea because of the aircraft carrier's relief mission in Japan.

"I can't see how (the aircraft carrier) will come back," a US military spokesman in Seoul told AFP, adding its mission in Japan would probably last several weeks.

The carrier was initially set to join the sea drill as part of the annual Key Resolve/Foal Eagle exercises, which began on February 28, some three months after North Korea shelled a South Korean border island.

The two exercises involve a total of 12,300 US troops and some 200,000 South Korean service members including reservists.

North Korea routinely denounces the annual drills as a rehearsal for invasion and has threatened to turn Seoul into a "sea of flames" in the event of any military provocation.

Newspapers said the 97,000-ton Ronald Reagan, a guided missile cruiser and a destroyer squadron had been scheduled to join the sea drill on Wednesday.

The South's defence ministry said South Korean troops would go ahead with the drill even without the carrier.

"It is uncertain whether the Ronald Reagan will eventually join the drill or not, but everything else from our side will proceed as planned," a ministry spokesman said.

Cross-border tension has been acute since Seoul accused Pyongyang of torpedoing a warship near the disputed Yellow Sea border in March 2010 with the loss of 46 lives. North Korea has denied the charge.

Tension was further heightened after the North's shelling of an island in November that killed four people including two civilians.