The Five-Year Plan calls for a shift from rapid economic growth to higher quality, more sustainable development with a greater emphasis on services and broader distribution of wealth. If carried out, the plan could drive a far-reaching transformation of the world’s second-largest economy from low-cost factory into a major consumer market.

More consumer demand could help to boost imports, narrowing China’s trade surplus with the United States and other major economies.

China also needs to shift money from companies to households, which could narrow the gulf between China’s poor majority and its rich elite and fledgling middle class ― who have profited from economic reform.

The wide-ranging plan promises more rural health care spending and job help for out-of-work farmers ― a step that could promote growth of service industries and consumption.

The nearly 3,000 members of the National People’s Congress approved the economic plan Monday after 10 days of meetings. The Five-Year Plan is a throwback to central planning but a useful roadmap of Communist Party goals.

The government said at the beginning of the session that it planned to boost defense spending by 12.7 percent this year. A legislative spokesman said Beijing’s return to double-digit military growth after a dip in 2010 was not a threat to other countries. 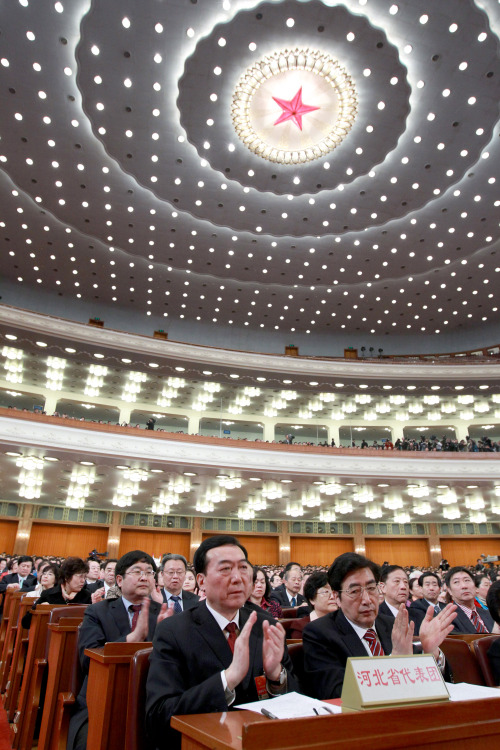 Deputies to the Fourth Session of the 11th National People’s Congress applaud during the closing meeting of the Fourth Session of the 11th NPC at the Great Hall of the People in Beijing on Monday. (Xinhua-Yonhap News)
The economic transformation plans come as President Hu Jintao and other party leaders prepare to hand over power next year to a younger generation. They are trying to ensure a smooth transition while leaders maneuver furiously in private to secure top posts for younger allies.

The plans for expanding access to health care would free up money for consumer spending, helping to push ahead the consumption drive.

In the countryside, home to some 800 million Chinese, the plan promises more spending to modernize agriculture and increase grain output ― a key concern for Beijing, which sees food security as a priority.

The plan to run through the end of 2015 calls for higher social spending, controls on inflation and measures to urgently close a divisive rich-poor gap, betting that rising living standards, better services and heavy policing will dampen growing public expectations for political change.

Chinese leaders have said repeatedly in recent years that the authoritarian government sees the combination of policies as crucial to forestalling unrest among a population now accustomed to greater prosperity and expecting more.

The emphasis comes as the government seems increasingly anxious about calls of unknown origin posted online urging Chinese to stage peaceful rallies every Sunday like the ones that topped autocrats in Tunisia and Egypt. Beijing has been smothering under ever-heavier security since the Internet messages first appeared more than one month ago.

The government will boost spending 12.5 percent this year, with bigger outlays for education, job creation, low-income housing, health care and pensions and other social insurance. Spending on police, courts, prosecutors and other domestic security will also exceed the military budget, climbing 13.8 percent to $95 billion.