All across spring training, Japanese ballplayers worried Friday about those at home. Hundreds of people were killed or missing after Japan was struck by its biggest recorded earthquake and a massive tsunami.

“It’s a tough situation,” Red Sox reliever Hideki Okajima said through a translator. “You can’t control nature, but when something like this happens, you really realize the power of nature.”

Matsuzaka said his parents in Tokyo were all right, but “I haven’t been able to get in touch with my grandmother,” he said.

At the Texas camp, pitcher Yoshinori Tateyama stood in front of a TV tuned to CNN. As he watched the pictures, he used his fingers to draw a map of Japan on a table, trying to show Rangers teammates Josh Hamilton and Mitch Moreland where the damage occurred.

Tateyama said he found out what happened in an e-mail from a friend after the morning workouts.

“At that time I realized how big it was,” he said through a translator.

More than a dozen players from Japan played in the majors last season. Through his translator, Seattle star Ichiro Suzuki said he hadn’t been able to reach his family with so many cell phone towers down. 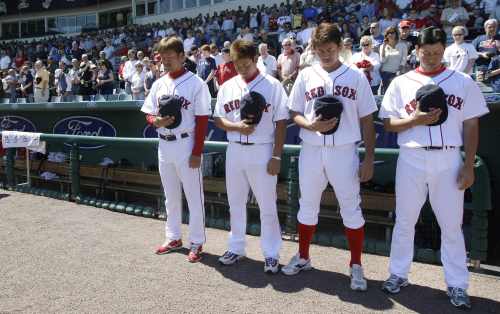 Japanese players of the Boston Red Sox pause for a moment of silence prior to a spring training game on Saturday. (AP-Yonhap News)
“I am deeply concerned and affected by what is happening in Japan,” Matsui said in a statement before his A’s played the Dodgers. “I pray for the safety of all the people that have been affected and continue to be affected by this disaster.”

Commissioner Bud Selig said his staff had been in contact with its office in Tokyo. In Japan, baseball games in Tokyo, Chiba and Yokohama were called off, as were all pro sports in the country.

“Major League Baseball will certainly provide aid with the relief efforts in the days and weeks ahead. We will do everything we can to help Japan,” Selig said in a statement.

The New York Yankees donated $100,000 for relief and rescue efforts in Japan, splitting the total between the Salvation Army and Red Cross.

The Oakland Athletics said they would help relief aid by adding a fundraising effort to the previously scheduled Japanese Heritage Day on April 3, when Ichiro and the Mariners visit Matsui and the A’s at the Coliseum. The San Diego Padres are pledged to raise money during their Japanese Heritage Night on May 20 against Seattle.

Beyond baseball, other sports were affected by the magnitude-8.9 earthquake.

There was a moment of silence before NBA games in Charlotte, North Carolina, Minneapolis, and Oakland, California.