All along, the union insisted the league’s owners were planning to lock out the players.

And that’s exactly what happened.

Unable to decide how to divvy up $9 billion a year, NFL owners and players put the country’s most popular sport in limbo by breaking off labor negotiations hours before their contract expired. At midnight, as Friday became Saturday, the owners locked out the players ― creating the NFL’s first work stoppage since 1987 and putting the 2011 season in jeopardy.

The league said in a statement Saturday it was “taking the difficult but necessary step of exercising its right under federal labor low to impose a lockout of the union.” 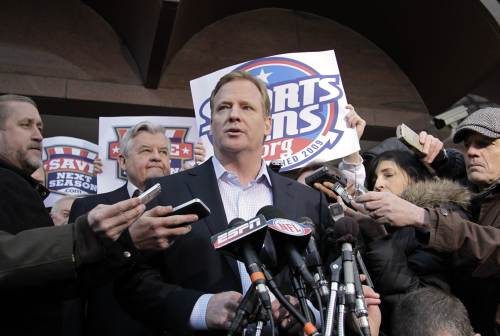 NFL Commissioner Roger Goodell speaks with reporters in Washington. (AP-Yonhap News)
On Friday, the union decertified, meaning it declared itself out of the business of representing players. In exchange for giving up their rights under labor law, the players became able to take their chances in court under antitrust law.

That paved the way for 10 players, including MVP quarterbacks Tom Brady and Peyton Manning, to sue the owners in federal court in Minneapolis in a class-action claim. The players also sought an injunction to block a lockout ― even before one had been imposed.

Despite two extensions to the collective bargaining agreement during 16 days of talks overseen by a federal mediator ― following months of stop-and-start negotiating ― the sides could not agree on a new deal.

The league’s statement Saturday called the NFL Players Association’s decertification a “sham” and said the players’ court action is “built on the indisputably false premise that the NFLPA has stopped being a union and will merely delay the process of reaching an agreement.”

The statement told fans: “We know that you want football. You will have football. This will be resolved.”

As was clear all along, the dispute came down to money. In the end, it appeared the sides were about $185 million apart on how much owners should get up front each season for certain operating expenses before splitting the rest of the revenues with players ― a far cry from the $1 billion that separated the sides for months.

But the union refused to budge any further without getting detailed financial information for each team.

By dissolving and announcing it no longer represents the players in collective bargaining, the union cleared the way for class-action lawsuits against the NFL, which exercised a CBA opt-out clause in 2008. The antitrust suit ― forever to be known as Brady et al vs. National Football League et al ― attacked the league’s policies on the draft, salary cap and free-agent restrictions such as franchise-player tags.

Invoking the Sherman Act, a federal antitrust statute from 1890 that limits monopolies and restrictions on commerce, the players are seeking triple the amount of damages they’ve incurred. That means the stakes could be in the hundreds of millions of dollars.