For centuries, rice has reigned supreme at the Korean dining table, acting as an anchor to the traditional spread of banchan (Korean side dishes).

In short, rice is crucial to the daily diet and is taken seriously here. Like wines, grains from certain regions are lauded above others. Rice aficionados even prefer specific varieties over others.

For example, the trifecta of rice-growing areas within Gyeonggi Province ― Icheon City, Yeoju County and Gimpo City ― are famed for producing some of the nation’s finest grains, not simply because all three areas boast ideal climates, soil and water for rice cultivation, but also because they sport legendary pedigrees.

Rice from Icheon City and Yeoju County graced the monarch’s table during the Joseon Dynasty, while Gimpo is believed to have started growing rice 5,000 years ago. 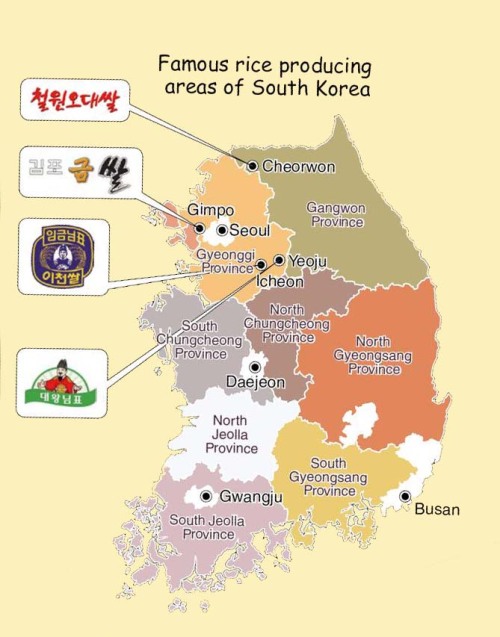 Aside from Gyeonggi Province, Odae rice from Cheorwon County in Gangwon Province also currently has a huge following. Representatives of both Lotte Mart and Home plus confirmed it is one of their most popular brands.

“It is the most expensive and comes from an unpolluted area,” Gangchon Ssam Bap owner Ham Sook-nyeo explained why the restaurant uses Cheorwon Odae Rice to make its famous dolsot (stone pot) rice.

Part of the hype comes from the fact that some of the rice is grown in the Demilitarized Zone, which, according to a Cheorwon County Office rice marketing spokesperson, boasts cleaner air and water.

The image of pure grains growing in a swath of land and water virtually untouched by man definitely has its draw. One spoonful of Gangchon Ssam Bap’s dolsot rice confirms the hype is not unfounded. 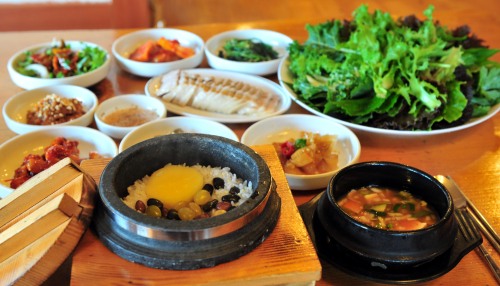 Gangcheon Ssam Bap’s dolsot (stone pot) rice is made from grains hailing fromCheorwon, Gangwon Province, and is cooked to order with a smattering of gingkonuts, black beans and a thick slice of sweet potato. Rice comes with around six sides,including fragrant slices of boiled pork, a mountain of greens and soybean paste stew.(Kim Myung-sub/The Korea Herald)
Glossy, chewy orbs impart a sweet nuttiness to the palate, giving way only slightly to the pressure of teeth, yielding that oft-sought for combination of softness and granular definition.

For now, areas like Cheorwon and Icheon still seem to be playing an influential role in determining the quality of rice. However, the variety of rice planted also matters, says Yang Chang-ihn, a rice cultivar (variety) developer at the rice research division of the Rural Development Administration’s National Institute of Crop Science.

“Before, the quality of the rice varied greatly based on where it was grown,” Yang, who works for an institute that develops new rice varieties, explained via e-mail.

Now, says Yang, even if rice is grown in the same area, its quality changes depending on what cultivar is used.

Korean rice, believe it or not, is not sourced from one sole variety. Even prior to the Japanese colonial period, up to 1,451 different varieties were documented. Today, new varieties are being developed, because, says Yang, climate and the rice farming environment are subject to change and there is always demand for better quality plants that yield more rice.

“Consumer preferences change,” he added. “They will want more upscale rice and will pay more for rice that is rich in nutrients and healthier.”

What, then, does Yang mean when he says upscale rice? He seems to be referring, in part, to taste. After all, consumers do not want to part with cash for health benefits alone. They also want to pay for palate-pleasing flavors.

For South Koreans ― who are accustomed to sticky, short-grained rice rather than long-grained basmati rice ― good rice should be white, translucent and shiny, says Yang. Each grain should be intact, a whole sphere of perfection, bearing no fissures or white spots in its center.

When cooked right, rice should be chewy and glutinous. It should be glossy and soft but not mushy.

“In our country, we prefer rice that does not exhibit strong flavors or fragrances because it needs to complement various banchan,” he added.

According to Yang, once the chaff and bran have been removed ― in other words, once the rice has been milled ― the outer layer of the grain becomes oxidized over time and can easily develop cracks. Furthermore, enzyme activity decreases, leading to a loss in flavor and aroma.

This may sound very scientific, but it appears that the average South Korean consumer is well aware of the benefits of getting freshly milled rice. Most of Lotte Mart’s and all of Home plus’ and E-Mart’s outlets allow customers to have rice milled on the spot, a sure sign that the general population knows what Yang is talking about.

How rice is milled is just the beginning, however. How it is cooked also plays a crucial role in how good it tastes. Though high pressure rice cookers are the norm, cast iron cauldrons or stone pots not only maintain an aura of nostalgic allure but also create delicious rice, because, says Yang, they distribute heat at high temperatures evenly to each grain.

Translated into simpler terms, if you use stone pots or cauldrons you can get fluffy rice, plus that classic Korean delicacy ― “nurungji” ― the golden crust of rice that forms along the bottom of the pot.

For the average South Korean, the pastoral scene of a heavy black cauldron powered by a fire underneath is a familiar sight. It is, in essence, the quintessential image of rice in its most authentic and delicious state.

It is the moment before the lid is lifted, before each steaming, snowy kernel is heaped high into bowls. It is the prelude to the moment when, after all the rice has been scooped out, hot water is poured over the “nurungji” to create a refreshing and delicious porridge-like dish, a dish so good it even has its own name ― “sungnyung.”

To experience this moment yourself, it is best to find a restaurant that specializes in dolsot (stone pot) rice.

At Gangchon Ssam Bap ― a mom-and-pop establishment perched halfway up a hill in scenic Pyeongchang-dong, Seoul ― patrons can dig into rice cooked-to-order in small stone pots.

The menu is limited to the Gangchon Ssam Bap course set and boiled pork slices, a positive indication that this restaurant is taking its food seriously and has great faith in what it has to offer.

The course set (10,000 won) includes a whole pot of Cheorwon Odae Rice, around six sides, including a platter of fragrant boiled pork slices, a huge bed of what appears to be 20 different greens, and a small stone pot of doenjang (soybean paste) stew.

The rice arrives covered with a wooden lid, allowing the customer to indulge in the pleasure of lifting the lid and breathing in the fragrance of the freshly cooked grains.

To get the full experience, scoop out each grain of rice into the empty bowl provided. Then pick up the huge metal kettle filled with dungulle (Solomon’s Seal) tea and pour it over the golden crust of rice stuck to the bottom of the pot. Cover with the wooden lid and wait until the meal has nearly ended to dig into the nutty stew of softened rice and tea.