WASHINGTON (AP) ― Higher oil prices are slowing global economic growth, and the impact is likely to spread in coming months.

Oil prices helped raise the U.S. trade deficit to a seven-month high in January, when crude prices were $87.50 a barrel. Oil is now trading at more than $100 a barrel, suggesting the gap will widen in coming months. Even fast-growing China isn’t immune ― higher oil prices contributed to a rare trade deficit there in February.

“It’s a bad start, because we all know the oil shock is still coming,” said Paul Ashworth, an economist at Capital Economics.

Since then, political turmoil in Libya, Egypt and Tunisia have sent oil prices surging. At the same time, accelerating economic growth in Asia and Latin America has also boosted demand. 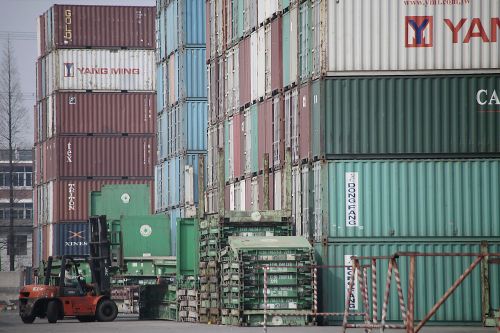 A forklift arranges the shipping containers near a port in Shanghai. (AP-Yonhap News)
The impact is visible in bold numbers each morning on gas station marquees across the United States. Pump prices have risen 13 percent in the past month to a national average of $3.53 a gallon, according to “AAA”, Wright Express and Oil Price Information Service.

Airlines have also been rapidly raising their fares to offset higher fuel costs. American Airlines said Thursday it is increasing its base fares by $10, the seventh price hike this year by U.S. airlines.

Jay Bryson, global economist at Wells Fargo Securities, said he has cut his U.S. growth estimate for the January-March period to 2.9 percent, down from about 3.3 percent last month. Much of that reduction is due to the impact of higher oil and gas prices.

The $46.3 billion trade deficit in January also will subtract from economic growth. Higher prices for oil helped drive imports up at the fastest rate in 18 years, as did rising demand for foreign cars, auto parts and machinery. Imports rose at nearly twice the pace of exports, to $214.1 billion, the Commerce Department said. Exports rose to an all-time high of $167.7 billion.

That isn’t all bad news. A wider deficit is partly a sign of greater spending by businesses and consumers. But it also means that more of that spending is going overseas, reducing U.S. economic growth.

Imports of foreign-made autos and auto parts increased 14 percent, or $2.67 billion, as auto production rose in the U.S. and Canada. Demand for big-ticket capital goods such as industrial machinery and computers increased 5.2 percent. Imports of consumer goods, such as clothing, shoes, electronic appliance and toys and games, were up 2.2 percent.

“To the extent that this surge reflects the strength of domestic demand ... it isn’t necessarily a disaster,” Ashworth said.

Rising oil prices can slow the economy in another way: by spurring central banks to raise interest rates. Few economists expect the U.S. Federal Reserve to take such a step. But that’s a potential problem in Europe.

Both the European Central Bank and the Bank of England appear to be preparing interest rate hikes in the next couple of months, in an effort to keep inflation in check.

Many analysts fear that could bring a faltering economic recovery in Europe to a halt. Though Germany, Europe’s economic powerhouse, is growing strongly, a number of countries, notably the highly indebted nations such as Greece and Portugal, are expected to contract further this year. Europe is a major source of U.S. exports and a slowdown there could weigh on the U.S. recovery.

The turmoil in the Middle East could have a bigger impact on Europe’s economy than the U.S., economists at Bank of America Merrill Lynch wrote in a research note.

The U.S. has a lot of natural gas, which serves as alternative energy source, and can refine a wider variety of crude oil, the economists said. European countries are more exposed to rising oil prices because they primarily consume the “sweet crude” produced by Libya. Refineries in Europe are not as well equipped as those in the U.S. to process other varieties of oil.

Still, the impact on both the U.S. and Europe will likely be limited, economists said.

Mark Zandi, chief economist at Moody’s Analytics, recently cut his forecast for economic growth in 2011 from 3.9 percent to 3.5 percent. He cited rising oil prices and expected spending cuts in Washington as the reasons for the downward revision.

Zandi also boosted his estimate of the average price of oil this year from $90 to $100.

Oil prices would have to top $150 a barrel to truly threaten the recovery in the U.S. and around the world, most economists say.

Pricey oil is hurting even the strongest economies. China, which typically runs huge trade surpluses with the rest of the world, reported a surprise deficit of $7.3 billion for February. Higher prices for oil and other commodities pushed imports up 19.4 percent while its exports dropped 2.4 percent.

The export decline reflected the fact that Chinese businesses were idled for the weeklong Lunar New Year holiday. Analysts said the rare trade deficit for China was likely to be temporary and not the start of a trend.

More expensive oil isn’t bad news for everyone. Saudi Arabia, Iran and Venezuela and other OPEC members, as well as Russia and Mexico, benefit from the rise in prices.