“I have really been playing well the last six months and that is what I look at, not that I didn’t make it to the final of the last four Grand Slams,” Federer said.

Second-seeded Federer is fully primed for his first match on the weekend after being awarded a first-round bye at the $9 million Indian Wells WTA and ATP Masters Series tournament.

The 16-time Grand Slam winner lost in the final of his last tournament to Novak Djokovic in Dubai. Federer has only played three tournaments this year and hasn’t made the final of the last four Grand Slams.

That is a far cry from 2006-2007 when he won six of eight Grand Slam events. Djokovic has been especially troublesome for Federer of late, beating Federer in the Australian Open final in January.

“It is part of my big goal this year to get back to No. 1 because I like being world No. 1 more than No. 2,” said the three-time Indian Wells champion, who held the top ranking for 285 weeks.

“I was happy about the way I played in Dubai. I won four in a row. I didn’t play my best against Novak. Even though I lost the finals, I haven’t thought about that match for two weeks.”

Federer has reached two finals in three tournaments this year, winning in Doha. This is the first time in eight years Federer hasn’t held a Grand Slam title. He has 14 wins this year and just two defeats, both losses being to Serbia’s Djokovic. 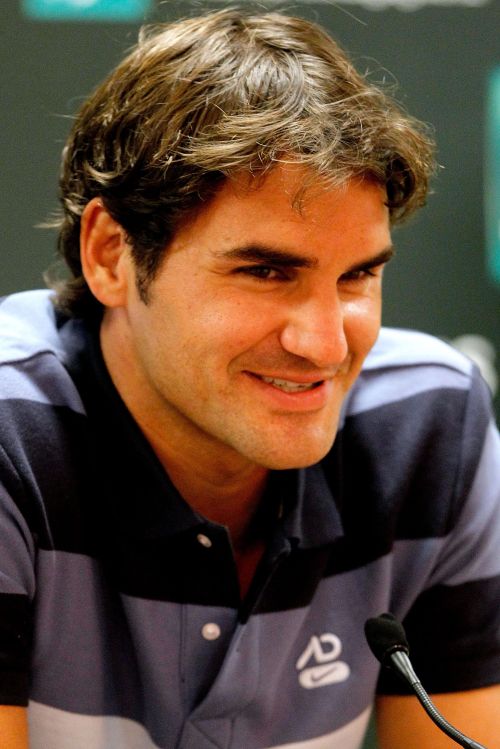 Roger Federer (AFP-Yonhap News)
Clearly if he is to reclaim the No. 1 ranking, Federer is going to have to figure out a way to solve Djokovic, who is seeded third at Indian Wells.

Federer and Djokovic are in the bottom half of the 96-player men’s draw and so could be headed for a semifinal showdown.

“He is in a good spell right now,” Federer said of Djokovic. “It will be interesting to see how he plays here.”

Federer was relaxed and calm Thursday as he met with reporters for the first time since arriving in Indian Wells.

He said he tries not to dwell on defeats even if someone has his number like Djokovic obviously does.

“Losing doesn’t rattle me much,” Federer said. “For me after a loss it is time to move on. Of course, it is difficult when you lose but you have to move on.

“It is OK to look at a lost match but I prefer to get over it as quickly as possible because this is an important time of the season.”

Federer hasn’t played as much at this point in the season compared to previous years but he says he is in a good frame of mind.

“I am confident,” he said. “I played three tournaments and it is a good start. I don’t have any injuries and I am fresh.

“I am now going into an important stretch of the season.”

Federer says one aspect he appreciates more about competing in the California desert is the relaxing pace of life in the laid-back retirement community.

“I remember coming here (in 1999) and I was always being mistaken for other players so I have come a long way,” Federer said.

“I have had some good years here at Indian Wells. At first I thought it was a bit slow here. As a teenager I thought I needed a bit more New York and London atmosphere. But now it is nice to get a calm tournament before going to Europe and so forth.”