Gyeonggi Governor Kim Moon-su, one of the ruling bloc’s strong presidential hopefuls, is facing a potentially critical setback as prosecutors are expanding their inquiries into allegations of illicit political funding involving several of his sponsors.

The political funding law bars a company or a group from making political donations. Breaking a large sum of money into small amounts and having a number of employees offer each small amount to a politician under their names is also illegal.

According to prosecutors, some 280 employees of the foundation ― affiliated with the provincial government ― sent 100,000 won ($89.17) to one million won each to Kim’s accounts between March and April last year. 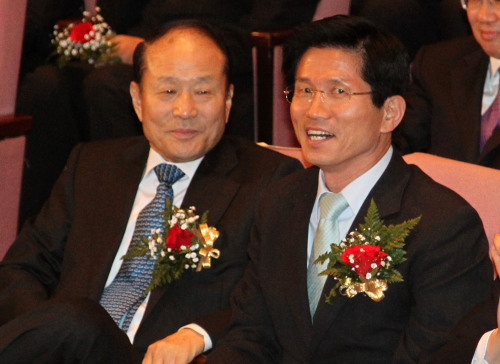 Gyeonggi Governor Kim Moon-su (right) sits with Rep. Lee Sang-deuk, an elder brother of President Lee Myung-bak, during an event in Seoul last week. (Yonhap News)
The total donations amounted to about 60 million won. Prosecutors suspect that about three senior officials of the foundation pressured the employees to make the donations in small amounts.

It has been rumored that the political donations might have helped Park Hae-jin succeed in retaining his post as chief of the foundation for the fourth consecutive term last December. Park denies such allegations.

The political donations being linked to Daewon Express Bus ― made ahead of the elections by 1,050 members of the labor union at the bus company ― amounted to 105 million won with each offering 100,000 won to Kim, according to prosecutors.

Some observers raised the possibility that the bus company might have made the donations to secure more profitable bus routes in the province. The labor union chief has claimed the donations were made “with a pure intention to support Kim.”

Daewon Express Bus is a subsidiary of KD Group, the nation’s largest passenger transportation company that runs some 5,000 buses with about 9,500 employees.

On Wednesday, investigators raided the group’s headquarters and the offices of the labor union in Seoul for evidence. Prosecutors also questioned the 59-year-old head of the labor union, surnamed Kim, on the same day.

Some observers say that the ongoing inquiries may not target the ambitious politician. However, many concur that a series of allegations over the legal offenses could tarnish his reputation ahead of the 2012 presidential poll.

“There were media reports about the political donations. I am very frustrated as it is unfair,” he said in a Twitter message. “I am frustrated as reports say as if the political funding by my sponsors were in connection with me. Justice will prevail in the end.”

Kim, 59, has been seen as one of the strongest presidential contenders in the Grand National Party with his ample experience in the political arena and public administration. He has served as a GNP lawmaker three times. He is also serving as Gyeonggi governor for the second consecutive term.