[ The Korea Herald – Send E-mail ]
Kaspar the friendly robot helps autistic kids emote
By 이윤주
Published : Mar 9, 2011 - 18:47
Updated : Mar 9, 2011 - 18:47
STEVENAGE, England (AP) ― Eden Sawczenko used to recoil when other little girls held her hand and turned stiff when they hugged her. This year, the 4-year-old autistic girl began playing with a robot that teaches about emotions and physical contact ― and now she hugs everyone.

“She’s a lot more affectionate with her friends now and will even initiate the embrace,” said Claire Sawczenko, Eden’s mother.

The girl attends a pre-school for autistic children in Stevenage, north of London, where researchers bring in a human-looking, child-sized robot once a week for a supervised session. The children, whose autism ranges from mild to severe, play with the robot for up to 10 minutes alongside a scientist who controls the robot with a remote control.

The robot, named Kaspar, is programmed to do things like smile, frown, laugh, blink and wave his arms. He has shaggy black hair, a baseball cap, a few wires protruding from his neck, and striped red socks. He was built by scientists at the University of Hertfordshire at a cost of about 1,300 pounds ($2,118).

There are several versions of Kaspar, including one advanced enough to play Nintendo Wii. The robot’s still in the experimental stage, and researchers hope he could be mass-produced one day for a few hundred dollars. 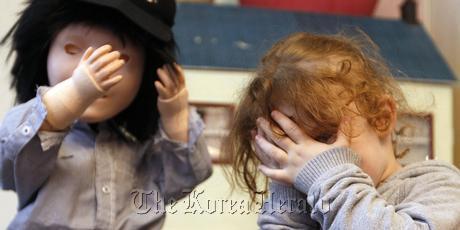 A girl reacts to “Kaspar” the robot, an advanced humanoid designed to help autistic children develop social skills. (AP-Yonhap News)
“Children with autism don’t react well to people because they don’t understand facial expressions,” said Ben Robins, a senior research fellow in computer science at the University of Hertfordshire who specializes in working with autistic children.

“Robots are much safer for them because there’s less for them to interpret and they are very predictable.”

There are similar projects in Canada, Japan and the U.S., but the British one is the most advanced according to other European robot researchers not connected with the project.

Scientists at the University of Hertfordshire first began using a version of Kaspar in 2005. The newest model is covered in silicone patches that feel like skin to help children become more comfortable with touching people. So far, almost 300 kids in Britain with autism, a disorder that affects development of social interaction and communication, have played with a Kaspar robot as part of scientific research.

The robot has only a handful of tricks, like saying “Hello, my name is Kaspar. Let’s play together,” laughing when his sides or feet are touched, raising his arms up and down, or hiding his face with his hands and crying out “Ouch. This hurts,” when he’s slapped too hard.

But that is enough to keep autistic children enthralled. Ronnie Arloff, 4, was so eager to see Kaspar he banged on the door and shouted his name. Arloff opened his arms wide just like the robot.

He also recognized facial expressions, saying “happy” when Kaspar was smiling and “sad” when he frowned.

Nan Cannon-Jones, an autism consultant at the school, said the robot helps children understand emotions and language. “After Kaspar says ‘haha’ when he’s tickled, the children learn that’s what laughing is,” she said. Two of the 12 to 17 kids who attend the pre-school have refused to play with Kaspar outright.

The school also uses speech and music therapy. “You can’t teach children to speak or play using a robot, but it helps reinforce what we’re teaching them already, like how to share and be nice to people,” Cannon-Jones said.

Experts not linked to the project said it was a promising idea.

“Autistic children like things that are made up of different parts, like a robot, so they may process what the robot does more easily than a real person,” said Dr. Abigael San, a childhood clinical psychologist in London and spokeswoman for the British Psychological Society.

She thought it was possible that skills children learned with the robot at the pre-school could be transferred to their homes or the playground. But San warned that experts and parents should not rely on robots too much. “We don’t want children with autism to get too used to playing with robots,” she said. “Ultimately, they need to be able to relate to other people.”

Kerstin Dautenhahn, the senior researcher at the University of Hertfordshire behind the Kaspar project, said she and colleagues do not have enough data to know if playing with Kaspar has sped up social skills in autistic children. They have published case studies describing improvements in up to a dozen children but no long-term trials.

Researchers say prospects for a comprehensive study depend on funding and teacher-parent participation, since they would have to track the kids for years ― but they would like to carry one out.

She said it might also be possible to modify Kaspar to help children with other developmental problems, like Down syndrome.

Uta Frith, an emeritus professor of cognitive development at University College London, said the robot was valuable in providing children with social interactions, but doubted a machine was necessary.

“What’s important for autistic kids is that they learn how to play imaginatively,” she said. “And for that, you could use cooking pots or a shoe box.”

“Before, Eden would make a smiley face no matter what emotion you asked her to show,” she said. “But now she is starting to put the right emotion with the right face. That’s really nice to see.”