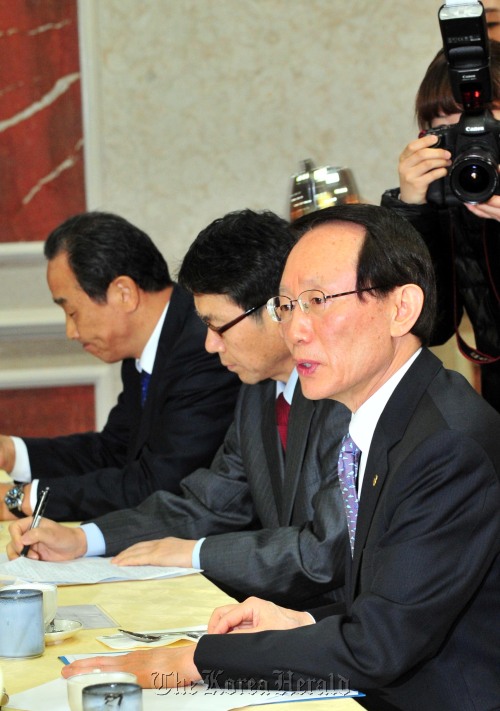 In his breakfast meeting with CEOs of the nation’s seven major credit card issuers, Financial Supervisory Service Gov. Kim Jong-chang compared the current situation with that of the 2002-2003 card fiasco.

“Like in 2002, there is a high possibility that credit card companies will engage in reckless business expansion without (appropriate) risk management,” he said.

He pointed out increasing card loans and cash advance services.

If the benchmark interest rate is hiked further, the companies will possibly see the delinquency ratio climb and bad assets increase, he said.

“Despite the risky factors, competition among the companies will be fierce this year as a company has been spun off its parent bank.”

He stressed that the past crisis was due mainly to surging soured loans in the wake of rivalry for business expansion among issuers, most of which had suffered liquidity woes.

He said the FSS will hand down stern disciplinary measures against irregular practices to attract customers, calling for the CEOs enhance internal controlling system.

A senior local banker welcomed the chief regulator’s move, saying, “The kind of tough warning is necessary as a preemptive measure. The market should not repeat the 2002-2003 fiasco.”

Card issuers have been fighting a marketing war since last year, vying for a bigger slice of consumer spending as it gets on track to recovery.

The competition led to sharp increases in card issuances and service loans, similar to the last industry crisis, in which the then-largest issuer LG Card and several others had to be rescued with creditors’ money.

The trend is more risky coming on top of already high household debt.

The average number of cards held by a Korean adult reached 4.59 last September, exceeding the previous record high of 4.57 in early 2003, according to the Credit Finance Association.

Experts are concerned about a flood of defaults stemming from card holdings by people with low-level credit standings.

Bad loan risk may begin among those who usually use card loans and cash advance services.

Last week, the FSS governor issued a strong warning against excessive competition among commercial banks during his breakfast meeting with bank CEOs.