Sabbatini, who began the day one stroke behind American Kyle Stanley, made five birdies against a lone bogey to stand on nine-under par 201 after 54 holes with South Korean Yang Yong-eun and American Jerry Kelly sharing second on 206.

Sabbatini is taking nothing for granted despite his large lead.

“I’ve got to go out there tomorrow and I’ve got to be focused and ready to go,” Sabbatini said. “I can’t expect the field to give the tournament to me, because that’s not going to happen.

“It’s a tough golf course. You can’t be complacent out there, because if you lose focus for a second, it can take shots away in a hurry,” Sabbatini said.

The 34-year-old South African, seeking his sixth U.S. PGA title and first since the 2009 Byron Nelson Championship, answered with an 18-foot birdie at 13 and pared his way to the clubhouse on a day when he reached only six fairways. 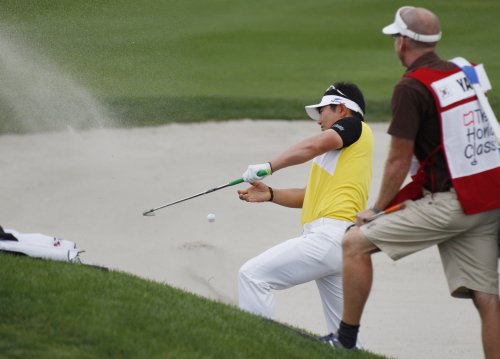 Yang Yong-eun of South Korea attempts to get out of a bunker on the ninth hole during the third round of the Honda Classic golf tournament in Palm Beach Gardens, Florida, Saturday.  (AP-Yonhap News)
“I’m feeling really good,” Sabbatini said. “I’m hitting the ball nicely, kind of limiting the big mistakes, which is key out there, especially in the tough conditions. The putting has just been doing great for me all week.”

Sabbatini switched putters this week and has been delighted with the result.

“I just didn’t feel like I was making anything,” he said. “I hit a lot of good putts and sometimes just changing the look of things, changing the feel of things, can kind of just spur something.”

“I tried to play conservative, just play par, and on 15, 16, I went quite well,” Yang said. “On 17 the second shot wasn’t too good and I had a long putt, but I think it looked links-style golf course, a good birdie putt, so I think I finished up the two holes quite well and I’m feeling good going into Sunday.”

Yang seeks his first title since the 2009 PGA Championship, when he became the first Asian man to capture a major crown.

“I just try not to be greedy,” Yang said. “You can’t beat a course like this so sometimes a course just let’s you take a birdie or two on it and I just capitalize on the moment.”

Kelly endured a roller-coaster round of six birdies and four bogeys, firing back-to-back birdies at 15 and 16 only to finish with consecutive bogeys to stumble back and finish on 68.

American Gary Woodland was fourth on 207, one stroke ahead of Stanley and two strokes ahead of four other U.S. players ― Charles Howell, Ricky Barnes, Tommy Gainey and Matt Bettencourt.

England’s Lee Westwood, who would retake the world number one ranking by finishing alone in third or better this week, made bogeys on the last four holes to fire a five-over 75 and stand on 214.

Westwood suffered three bogeys in the “Bear Trap,” the 15th, 16th and 17th holes at PGA National, and closed with his seventh bogey of the day.

Sabbatini will give the Bear Trap plenty of respect on Sunday after having played the holes at par through three rounds, taking a bogey at par-3 17 on Thursday and a birdie at par-3 15 on Friday.

“You’ve got to play smart. There’s no doubt about it,” Sabbatini said. “You have to be cautious and you have to give those holes their respect.”