This season a new team in Gwangju brings the K-League line-up to 16 teams.

After a three-month break, the 29-year-old league resumes this weekend with four matches slated for Saturday and Sunday.

The excitement has already begun as the league’s two arch rivals FC Seoul and Suwon Samsung meet in Seoul on Sunday.

With the weather forecast predicting a sunny day, it is expected that the 60,000-seated Seoul World Cup Stadium will be packed to capacity.

Pundits pick the defending champion FC Seoul as the favorite this season, but it faces a strong challenge from the 2010 FA cup title holder Suwon.

FC Seoul failed to renew its contract with Portuguese manager Nelo Vingada after lifting the 2010 season title trophy. The club also saw some of its key players leave.

Striker Jung Jo-gook left the team in a move to the French league earlier this year, and the team also lost two main midfielders, Choi Hyo-jin and Kim Chi-woo, due to their military duty. But they are still in possession of the league’s top scorer Dejan Damjanovic, and also signed Colombian midfielder Mauricio Molina.

Newly appointed FC Seoul boss Hwngbo Kwan said on Friday that he was confident of keeping the title crown. 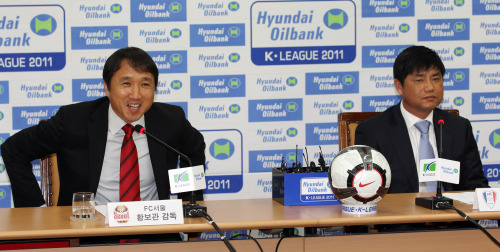 FC Seoul manager Hwangbo Kwan (left) and Suwon Samsung’s manager Yun Seong-hyo speak during the pre-match news conference at the KFA’s office in Seoul, Friday. (Yonhap News)
“I think we are a good solid team and I believe we can win the title again this year,” Hwangbo said during a news conference on Friday, sitting next to Suwon Samsung’s manager Yun Seong-hyo.

“Playing an away game is always tough. Playing against Seoul is going to be especially tough for us, but they have a weakness,” said Yun.

The two managers exchanged easy jokes during the pre-match press conference, but the teams’ rivalry showed through, escalating the expectations for the Sunday’s clash between the two sides.

“We want to play an exciting game, scoring many goals to entertain our home fans, but I’m a bit afraid that Suwon might play a strong defensive game to win the game,” said the FC Seoul manager.

Hwangbo also pointed out that Suwon needs to improve discipline and teamwork skills, considering Yun’s side has changed more than half of its squad.

Choi Sung-kuk, the former national striker, is wearing the captain armband for Suwon after his move from Seongnam. And national team wingbacks Oh Beom-seok and Oh Jang-eun also left Ulsan to join Suwon’s back line. Midfielder Lee Yong-rae, who shined during Korea’s Asian Cup campaign, made his move from Gyeongnam FC earlier this year.

“Suwon now boasts good squad members, all from the national team side. But I think they still need a lot of work to fine tune the side to really play as a team,” Hwangbo added.

Yun, however, fired back at the FC Seoul manager, noting that the Hwangbo’s side also lacks defensive disciplines.

“Seoul has some great foreign players in the attacking line-up, but their defenders are not that strong,” said Yun.

“And Seoul seems to have always struggled after winning the title, so I think it will be hard for them to even to make it into top six finish,” he added.

But, the 45-year-old Hwangbo said that he is more focused on not just defending the title but playing exciting football.

“We will do our best to score as many goals as possible so that more fans would want to come to see the games,” Hwagbo added.

Last season, the league recorded slightly more than 2 million spectators, but it hopes to attract more than 3.5 million this season, according the league organizer.