[ The Korea Herald – Send E-mail ]
Rare book collection on display at Stanford
By 김후란
Published : Mar 3, 2011 - 17:42
Updated : Mar 3, 2011 - 17:42
PALO ALTO, California ― Over hundreds of years, and thousands of miles, a collection of rare historic books now on display at America’s Stanford University bristles with an excitement as fresh as yesterday.

The collection, “The American Enlightenment: Treasures from the Stanford University Libraries,” offers a glimpse of trans-Atlantic intellectual debates triggered by the discovery of the New World, contributing to the revolutionary experiment that created the U.S. nation.

Could a perfect new government ― uncorrupted by European degeneracy and disorder ― be created?

Were the American Indians “the fundamental state of nature” of all human societies? How should children be raised? Was slavery immoral? What were these exotic plants and animals? Some books even touch on fashion, art and home decor.

Never before viewed by the public, stored behind lock and key in Stanford’s deep archives, all 40 books, manuscripts and illustrations relate to this founding era of 18th-century American history. Several books are unique “association copies,” books owned and signed by famous Americans.

“When we think of the revolutionaries, we think of political events and focus on political documents, such as the Constitution and Declaration of Independence,” said Caroline Winterer, the exhibit’s curator and a Stanford professor of American history.

“But what this exhibit shows is a wonderful intellectual exploration of the New World ― in every direction,” she said. “There were big ideas about human progress that extended to all realms.”

The American Enlightenment, which enabled the American Revolution, was the age of discovery and inquiry over issues of government, science, religion and human rights that stretched from roughly 1680 to 1820.

Highlights of the exhibit include a copy of John Milton’s “Paradise Lost,” the only book known to have been signed both by Thomas Jefferson and James Madison, close friends and political collaborators. 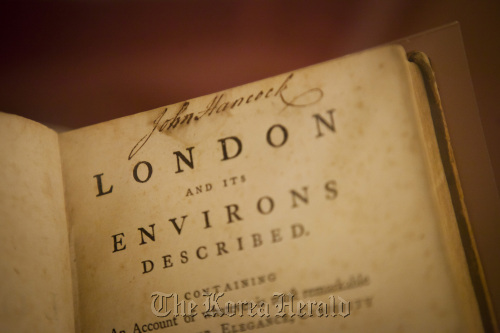 A copy of John Milton’s “Paradise Lost,” which is believed to be the only book known to have the signatures of two founding fathers, Thomas Jefferson and James Madison.   (MCT)
“We don’t know what the back story is,” Winterer said. “Was it owned by Jefferson, and lent to Madison? Or owned by Madison, and lent to Jefferson?”

Then there’s this mystery: “Why did Madison sign it five different times?”

Another book carries the signature of John Hancock as a teenager, before he developed the big, flamboyant flourishes that have become so iconic.

Also on display is an unpublished letter penned by Benjamin Franklin to Scottish immigrant physician John Lining, speculating that electricity might cause the human body to make heat.

“Part of being a famous Founding Father is that you appear to be wooden in the national memory,” she said. “Here we show them in their humanity, what they wrote and how they signed the pages. That gives a new perspective on these very famous people.”

There is also a magnificent color book about New World animals and plants, “The Natural History of Carolina, Florida, and the Bahama Islands,” and Nicholas Biddle’s 1814 account of Meriwether Lewis and William Clark’s “History of the Expedition,” which contains the celebrated map drawn by Clark that provided the first accurate depiction of the sources of the Columbia and Missouri rivers.

― A rare example of a book that illustrates Egyptomania in early America, as well as a vermin-chewed copy of a republican tract read by American revolutionary Henry Laurens while imprisoned in the Tower of London on suspicion of high treason. (Look for the fake mouse, carefully hidden, in the same cabinet.)

― A dictionary showing early attempts to standardize American names and places ― and an anthology of British play extracts owned by Boston slave Phillis Wheatley, the first African-American poet to be published.

“But Stanford’s collection is really growing in wonderful ways,” said Elizabeth Fischbach, exhibits manager. “Part of the exhibit is to highlight the growing strength of the collection.”

Winterer brings her students to the Special Collections reading room to study; it was their enthusiasm that gave her the idea to showcase the collection for the public. The featured materials are parts of collections donated to Stanford by two bibliophiles, the late Professor of American Literature Jay Fliegelman and the late New York attorney Charles Tanenbaum.

The team narrowed more than 100 possible choices down to 20, then grouped them in meaningful ways, each with stories to tell.

“It is written record of who we are,” said John Mustain, Stanford Library’s curator of rare books. “It reminds us that the American Enlightenment and the Revolution were not just dramatic, but also worked out so well.”