Four teams from South Korea’s K-League got off to mixed starts at the ongoing Asian Football Confederations Champions League this week.

Hwangbo Kwan, the new coach for FC Seoul, was victorious in his first official game with the team. He told reporters in the UAE that his club will only get better from here.

“We’re confident that we can win the next round,” Hwangbo said at a press conference. “Every club is strong, but if we play to our full capabilities, there’s no need to fear anyone.” 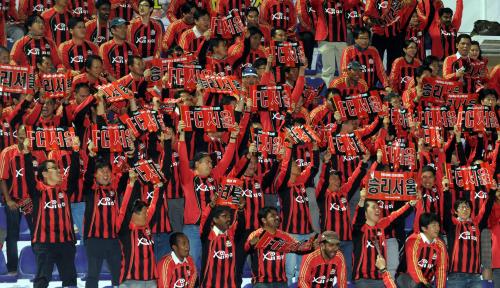 Dejan Damjanovic, the team’s top scorer last season, had the winner, and goalkeeper Kim Yong-dae made a crucial save on Al Ain’s penalty kick midway through the second half.

Though Suwon eked out a draw, it was a disappointing result considering Sydney played one man short for more than half of the match. Captain Terry McFlynn was sent off after stomping on Suwon’s Lee Sang-ho, but Suwon failed to capitalize on the man advantage.

“It was our first game after the offseason training, and players were not on the same page,” he told reporters in Sydney.

“I’d been worried about our lack of cohesion, and it haunted us today.”

In Jeonju, about 240 kilometers south of Seoul, Park Won-jae scored the winner for Jeonbuk. Coach Choi Kang-hee lamented some missed opportunities but said he was still content with the home victory.

“There was a lot of pressure on us since it was the first game of the season,” Choi said. “But we’re off to a fine start, given the way we played and the result of the game.”

Jeju is in the Champions League for the first time by virtue of finishing second in the K-League in 2010. But the team has lost some key players, namely midfielder Koo Ja-cheol, who is now playing in Germany after leading the Asian Cup tournament in scoring two months ago.

The loss was especially tough because Jeju did not lose in 19 home games a year ago. But coach Park Kyung-hoon said the Champions League “has only just started.”

“We can’t worry about Koo’s absence; he’s already gone and we can fill that void with training,” Park said. “We will try to get wins on the road.”

Jeju’s next match will be Down Under, against Melbourne Victory, on March 15. Also on that day, FC Seoul will host Nagoya Grampus of Japan at the Seoul World Cup Stadium.

Jeonbuk next plays on March 16, when it faces Arema Indonesia on the road. Suwon’s second game is at home against Shanghai Shenhua on March 16, too.