[ The Korea Herald – Send E-mail ]
Mungyeong hopes to host 2015 Military World Games
By 김윤미
Published : Mar 2, 2011 - 19:29
Updated : Mar 2, 2011 - 19:29
For most South Korean people, Mungyeong in North Gyeongsang Province is associated with “Mungyeong Saejae,” a mountain trail that helped Koreans in the Joseon era living in the southeastern peninsula pass over the Sobaek Mountains to get to Seoul.

This week Mungyeong is busy welcoming the evaluation committee that will assess the city’s bid to host the 2015 Military World Games. The committee arrived in Seoul on Tuesday and started its two-day evaluation Wednesday by visiting the city.

The Brussels-based CISM, which stands for Conseil International du Sport Militaire, or the International Military Sports Council, organizes the multi-sport event for military sportspeople that is held every four years.

The CISM was founded in 1948 in Nice, France, to develop military athleticism and contribute to world peace by cultivating military sports friendship among servicemen and servicewomen of member nations. 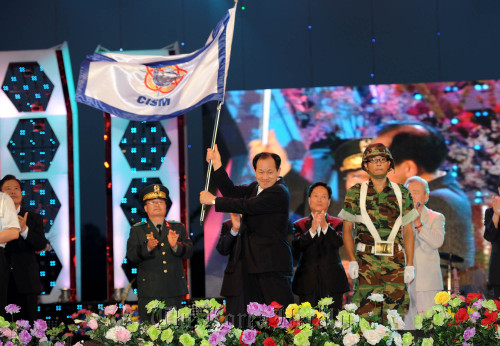 Mungyeong Mayor Shin Hyun-kook waves a flag hoping for the city’s successful bid for the CISM Military World Games 2015 during a local riverside festival last August. (Mungyeong City)
South Korea joined the organization in 1957 with the recommendation of Greece. North Korea participated in the Beijing events in 1992 as an observer and attained its official membership in 1993.

In 1999, Croatia’s Zagreb held the second Military World Games where 6,734 participants from 82 countries participated in 20 categories.

It was followed by the third games in Catania, Italy, in 2003 with 4,500 participants from 90 countries in 18 disciplines.

In 2008, India’s Hyderabad held the fourth games where 4,738 participants from 101 countries gathered to compete. 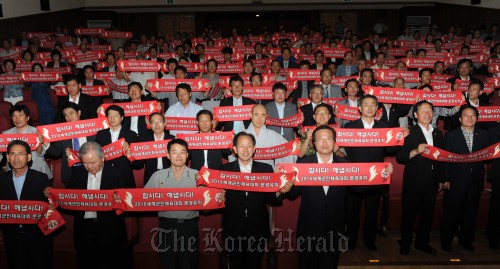 Officials with Mungyeong City banners show their enthusiasm for hosting the CISM Military World Games 2015 at a rally last year. (Mungyeong City)
The 2011 Military World Games is scheduled to take place in Rio de Janeiro, Brazil, in July. It is expected to be the largest military sports event ever held in Brazil, with approximately 4,900 athletes from over 100 countries competing in 23 disciplines.

Mungyeong is bidding to host the 2015 Military World Games for eight days from May 29 to June 5 at the Korea Armed Forces Athletic Corps’ sports complex in Mungyeong and six other cities in North Gyeongsang Province.

Under the city’s bidding plan, participants will compete in 25 disciplines and archery will be a demonstration sport.

Out of the 25 categories, Mungyeong and the Korea Armed Forces Athletic Corps hope to hold 12 games while other cities ― Sangju, Gimcheon, Yeongju, Andong, Yecheon and Pohang ― hope to hold the rest.

The results of the committee’s evaluation will be reported to the board of the CISM at their meeting in Algiers, Algeria, on March 22-24.

The host of the 2015 Military World Games will be decided on May 12, during the General Assembly of the CISM in Seoul on May 9-12.

If Mungyeong hosts the 2015 Military World Games, the city gets second-phase state funding to support infrastructure building for the event. The Ministry of Strategy and Finance approved a 53.8 billion won ($34.6 million) first-phase budget for the city’s bidding in August 2010.

Mungyeong winning the bid would help attract five-star hotels to the region as well.

Since becoming the first Asian country to join the CISM membership in 1957, South Korea has been actively involved in CISM events.

During the four Military World Games in which Korea has participated, the country’s overall ranking was highest at 5th in 1999 and lowest at 17th in 1995. Korea has been strong in judo, taekwondo, boxing and wrestling in terms of gold and silver medals.

The nation opened a CISM liaison office for the Far East in Korea in 1967 and taekwondo became an official CISM discipline in 1979.

For Mungyeong’s bid, Korea formed the 2015 Military World Games bidding team in December 2009 and reported the bid plan to the Ministry of National Defense in March 2010.