Contracts may climb to 1.8 trillion won ($1.6 billion) from 890 billion won last year, chief executive Lee Sung-hee said in an interview at the engine maker’s headquarters in Changwon. The company wants non-marine products, such as generators for power plants, to account for 40 percent of sales in 2020 from about 5 percent now, he said.

“We are in the early stages of recovery,” Lee, 60, said. “Shipping lines seem to realize they can’t wait any longer because rising raw-material costs could push ship prices higher.”

To help boost sales, the engine maker plans to expand in China, Brazil, Russia and India through technology tie-ups and other accords, Lee said. The company will also bid to supply engines for 10 record-sized container ships ordered by A.P. Moller-Maersk A/S on Feb. 21 as the Danish line adds capacity in anticipation of rising global trade.

“Things look good for Doosan,” said Choi Won-kyung, an analyst at Kiwoom Securities Co. in Seoul. “It wouldn’t be all that surprising if they end up making all the engines for Maersk’s order.”

Maersk ordered vessels able to carry 18,000 containers apiece, with options for 20 more, from Daewoo Shipbuilding & Marine Engineering Co. in a deal worth as much as $5.4 billion. Daewoo, the world’s third-largest shipbuilder, and second-ranked Samsung Heavy Industries Co. both own stakes in Doosan. 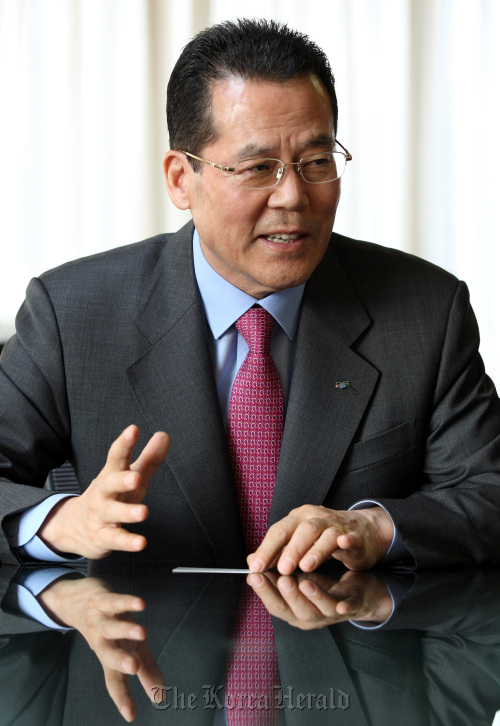 Doosan Engine CEO Lee Sung-hee (Bloomberg)
The Maersk ships will use engines fitted with a heat-waste recovery system that will help pare carbon emissions 50 percent compared with current vessels on Asia-Europe routes, according to the shipping line. Engines generally account for about 20 percent of a ship’s price, Lee said.

Doosan expects 2011 operating profit, or sales minus the cost of goods sold and administrative expensive, to surpass last year’s 230.4 billion won, Lee said, without elaboration. The company had a backlog worth 4.6 trillion won, or more than three years’ work, at the end of December.

“The shipping industry will have no choice but to continue growing considerably because of free-trade accords,” Lee said. “That is going to make the world into a shopping mall with the bulk of the volume going by sea.”

“Our business structure is too exposed to the shipbuilding industry,” he said. “There is a need to find means of ensuring our long-term survival.”

Global container-ship orders dried up for almost two years during the global recession as a shortage of credit and falling trade sapped confidence. World trade may grow 7.1 percent this year, the International Monetary Fund said in January.