How success is defined depends on the team, but almost half will be dreaming of the golden trophy. The serious contenders are the usual suspects and teams that have all won it in the last decade: Seoul, Jeonbuk, Suwon, Pohang, Ulsan and Seongnam. Any of these six could be sitting pretty next December and all will be disappointed if they don’t at least make the playoffs.

In the past two weeks, The Korea Herald has looked at the big two ― FC Seoul and Suwon Bluewings ― and the challenge from the five teams based in the Gyeongsang Province. Now it is time for the rest.

Jeju United fans would no doubt insist that after finishing second last season, and topping the standings for many weeks, the islanders have what it takes to go one better in 2011.

It is unlikely for two reasons. The team’s exploits earned it a place in the Asian Champions League. That is a double-edged sword. The group stage alone feature six games home and away against 2008 continental champions Gamba Osaka, Australia’s Melbourne Victory and China’s Tianjin Teda. It is a tough group and tough traveling with K-League fixtures either side of midweek trips. It takes it out of a team.

Also out of the team is star midfielder Koo Ja-cheol. The 21-year-old has joined 2009 German champions VfL Wolfsburg. The midfielder scored five times in 2010 and made 12 assists. That, coupled with the fact that he finished the 2011 Asian Cup in January as tournament top scorer, led the Bundesliga club to make its move.

Others have continental commitments and departed stars to deal with, but the problem is that Jeju have little experience of these situations. Seoul, Suwon and Jeonbuk are also preparing for Asian action but are, in theory at least, better able to handle the situation. Despite that, the team that exits earliest may reap domestic benefits. 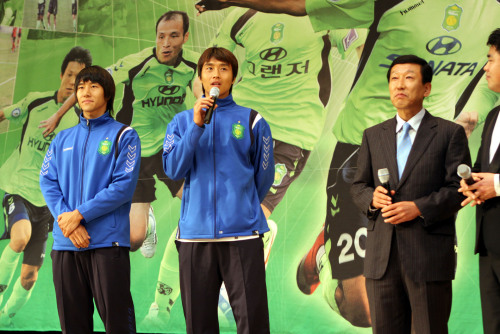 Jeonbuk’s Lee Dong-guk
Jeonbuk has been relatively quiet in the transfer market unlike its two big-spending rivals and the team won’t look too much different to 2010. Choi Kang-hee is still the coach. Lee Dong-guk is still the main marksman and Brazilians Eninho and Luiz are still there to provide the ammunition and do a little sharpshooting of their own. The big difference is that Kwon Sun-tae has left to become the goalkeeper for new military club Sangju Sangmu in North Gyeongsang Province.

The new club is another point of interest. North Gyeongsang soccer fans will be able to see how their new team handles Incheon United on the opening weekend. The team has brought in some good players, such as Kwon, FC Seoul pair Choi Hyo-jin and Kim Chi-woo and Ulsan’s Kim Chi-gon but as always, the military men will take time to gel as a team. Incheon is led by Korea’s 2010 World Cup coach Huh Jung-moo.