Board members of the nation’s third-largest financial group recently endorsed a proposition that Ra be entitled to stock option rights, industry sources said on Tuesday.

The stock options amounted to more than 300,000 shares. Considering the group’s stock price is hovering at the 47,000 won level, the former chairman could enjoy assessment gains worth billions of won.

But the board members put off their decision whether to also offer the same rights to former Shinhan Financial Group president Shin Sang-hoon and former Shinhan Bank CEO Lee Baek-soon. 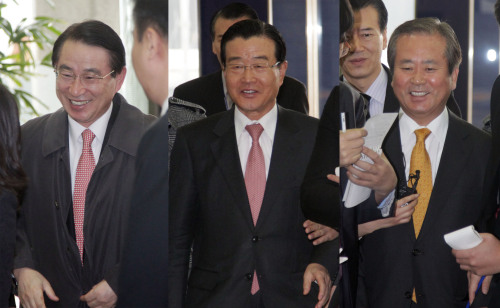 Ra Eung-chan (Center)
Along with Ra, Shin and Lee also had to quit in turn after alleged irregular practices and an internal feud hit the market last September.

Though all of the three former group executives had been suspected of embezzling the group’s honorary fees, the prosecution indicted only two of them, excluding Ra, in December.

Despite the prosecutors’ decision, however, Ra was reprimanded by financial regulators for violating the real-name account laws.