The demonstration, which was registered with police by the Libyan Society of Korea, saw protesters call for the North African nation’s leader Moammar Gadhafi to step down.

Over one thousand people in Libya are believed to have been killed and thousands wounded in weeks of bloody clashes between anti-government protesters and government troops loyal to Gadhafi.

The leader of 41-years has refused to leave power, and is sitting tight in his stronghold in the nation’s capital Tripoli as his troops fight to regain control of much of the country now under rebel control.

“I am loved by all my people,” he told foreign journalists amid calls from world leaders and protesters in his country for his ouster. 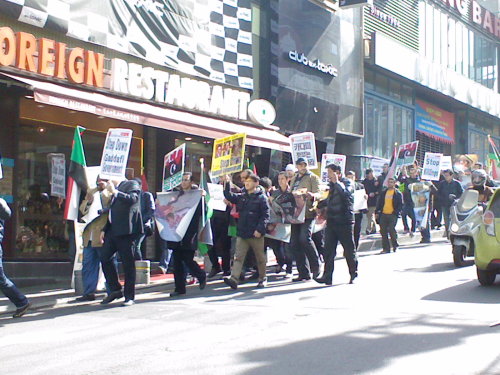 Protestors march along a street in Itaewon toward the Libyan Embassy to demand the ouster of Libyan leader Moammar Gadhafi. (Paul Kerry/The Korea Herald)
Libyans currently living in Korea followed those who have taken to the streets in their native land to call for the ruler to leave power.

They were joined by protesters from Egypt, Morocco and other Arab nations for the march after prayers at Seoul Central Mosque at 2 p.m. on Friday.

Protesters carried placards calling for Gadhafi’s resignation in English and Korean as they marched from the mosque in Seoul’s Itaewon district to the Libyan Embassy.

Huseyin Jang, a translator at Seoul Central Mosque, said: “There were Libyans, Egyptians and Moroccan people who took part in the protest. They marched from the Mosque to the Libyan Embassy.

“They were protesting over the situation in the Middle East and calling for Gadhafi to step down.”

Around 150 people were initially expected to attend, but U.S. army officials, who monitored the march that passed by the area of the Yongsan U.S. army base, said around 50 protesters were seen at the event.

The U.S. army also reported that the protest was carried out peacefully.