The 29 expats from 14 countries, including the U.S., Canada, Britain, the Philippines and Thailand, will introduce Gangnam’s tourist attractions to their home countries using social media such as Twitter and Facebook.

They will also contribute an essay about their experiences in Korea on a regular basis, working as reporters for a community newspaper, the office said.

Aimed at strengthening its overseas promotional activities, the district picked the honorary publicists among those who applied for the public selection in January.

After holding a launching ceremony on Feb. 26, they looked around popular spots in southern Seoul such as the tomb of Prince Gwangpyeong of the Joseon Dynasty, Bongeunsa, a Buddhist temple, and Philkyungjae, a traditional restaurant. 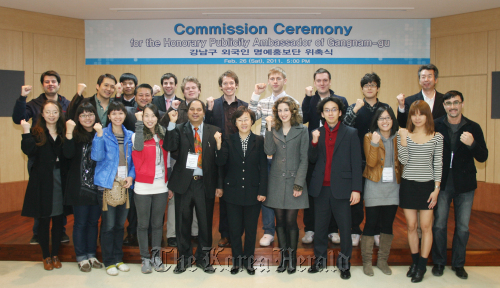 Foreign publicity ambassadors for Gangnam hold a starting ceremony at the district office on Feb. 26. Gangnam-gu Mayor Shin Yeon-hee is at center, front row. (Gangnam-gu Office)
The district office will hold such tourism programs regularly and invite them to art performances, exhibitions and other cultural events.

It also plans to select more foreign publicity ambassadors in the future and to award a prize for those who perform well.

“I hope they continue to have affection and interest in the district and let people around the world know more about Gangnam where traditional and modern aspects coexist,” she said.