The club’s star right fielder was kept out of Cleveland’s starting lineup for the spring training opener against Cincinnati on Sunday to rest his left elbow, which flared up in recent days. Choo had Tommy John ligament-replacement surgery on the same elbow in 2007, but said the current soreness is unrelated to that procedure.

Choo plans to be the Indians’ DH for a few games and hopes to be back playing in the outfield by the end of the week if his elbow feels better.

He was initially worried about the soreness, but an MRI showed no structural damage.

“The good news is it’s not inside the joint,” Choo said. “It’s outside. Everything is good. It’s not a big issue.”

While Choo’s injury doesn’t appear to be serious, it has to be worrisome for the Indians, who lost 93 games last season and are currently without center fielder Grady Sizemore. He’s following his own program as he recovers from offseason microfracture knee surgery and may not be ready for opening day. 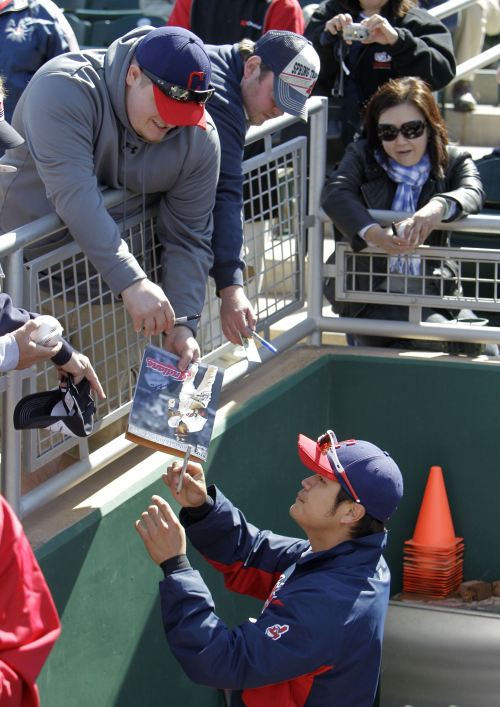 Cleveland Indians right fielder Choo Shin-soo signs autographs before a spring training game on Sunday. (AP-Yonhap News)
It’s understandable if the Indians want to be overly cautious with Choo, who batted .300 with 22 home runs and 90 RBIs last season. He also led the majors with 14 assists.

Choo said the Indians’ medical staff believes he may have hyperextended his elbow during the offseason.

He began his throwing program in late January and it’s possible he increased his distance too quickly and put unnecessary strain on the joint.

Choo didn’t take much time off after the season ended. He played in the Asian Games in November, helping South Korea win the gold medal.