A black spaceship-like object seems to have landed on the third floor of Artsonje Center in Sogyeok-dong, central Seoul. Inside its dark room, about 10 cushioned seats are installed, encircling a large screen.

Named “H Box,” the 6.5 meter wide and 5 meter tall structure is a mini, portable screening room for video artworks, designed by French-Portuguese architect Didier Fiuza Faustino at the request of the Hermes Foundation.

“‘H Box’ project has three objectives ― one, to support video artists to make single channel videos; two, to have the works travel around the world; and three, to create a network of contemporary artists all over the world,” said Catherine Tsekenis, head of the foundation, at Artsonje Center last week. 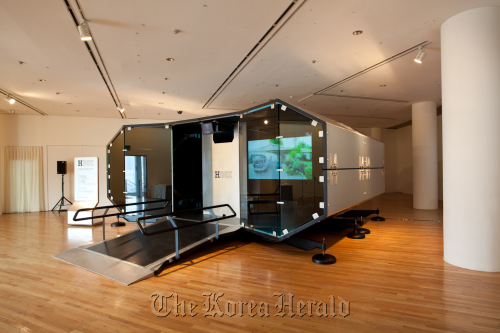 A view of “H Box,” installed in Artsonje Center in Sogyeok-dong, central Seoul. (Hermes Foundation)
The project was initiated in 2006 and so far a total of 21 video works have toured around prestigious museums and art festivals of the world, via the box, like the Pompidou Center in Paris, the Castilla-Leon Museum of Contemporary Art in Madrid, the Tate Modern in London, the Yokohama Triennale in Japan and the Sao Paulo Biennale in Brazil, before arriving in Seoul.

Hermes, a French luxury brand, has supported contemporary art since the establishment of its foundation in April 2008. Other than conducting special projects like “H Box,” the foundation holds art shows all year round at its exhibition venues in Brussels, Tokyo, New York, Singapore, Bern and Seoul, and gives out Hermes Art Awards every year.

Company officials said that all beautiful things were thought to be related to art when the fashion house was established in the 1800s, and so it strongly believes that fashion and art should coexist.

“Hermes is a company that produces very beautiful objects. So we are certain of the closeness between art and what we produce,” said Tsekenis.

Receiving support from such a stable foundation can be a life-time opportunity for artists.

“It was the first time I could work as freely as I wanted, without worrying about the budget,” said Nam, the only Korean artist who participated in H Box.

“There are no pre-established criteria for choosing the works, but I have realized a certain similarity ― all the artists I choose are interested in performances,” curator Benjamin Weil, who has been in charge of the project since 2006, told The Korea Herald.

“What I’ve witnessed during the past 10 years it that artists started to use very portable equipment and enjoy an incredible degree of freedom. If video art were closer to cinema ten years ago, now it is no longer about the media but is about the language and how they talk. It is like we are witnessing a new age of video.”

Supporting contemporary art is a new found interest for relatively latecomers as well. Comme des Garçons, a top-tier Japanese fashion label, created an art gallery named Hannam Six on the first floor of its Seoul boutique when it opened in Hannam-dong in August last year.

The “Six” in the gallery name refers to the sixth sense, or intuition. Rei Kawakubo, founder and designer of the brand, is known to have opened the gallery to express her artistic spirits that could not be fully expressed through fashion. The brand runs two galleries; one each in Seoul and Osaka. 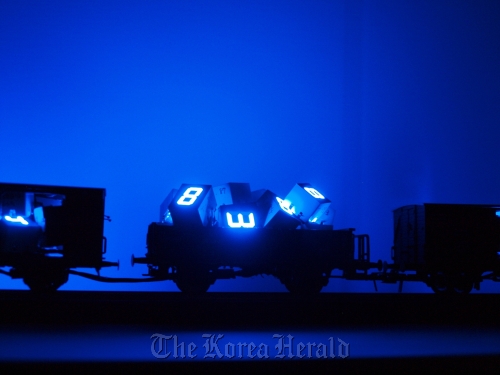 “Time Train” by Tatsuo Miyajima. (Comme des Garçons)
A miniature version of the train that was used to transport Jews to Auschwitz during World War Ⅱ runs around on a 62 meter long wooden rail in the gallery. Numbers from one to nine flash on tiny LED boards that are displayed on the train.

“The numbers shine to express the light of life and they change from one to nine to show the timeline from birth to death. I did not use zero because it means death and darkness,” Miyajima told the press on the opening day of the show.

“I used the wooden rail to show how the train explores the endless land. So many Jews died at the time when the train used to run to and from Auschwitz. Nazism not only divided Germany but also the world. Korea is currently world’s only divided country. I wanted to bring the work here to think about the problem with Koreans.”

Comme des Garçons' boutique itself has become a hot spot among young people in Seoul for its artistic and hip structure. Instead of stairs, a gentle slope leads to different floors and artworks are displayed along the way.

Among them, “2nd Cycle Project” for which the fashion brand collaborated with Finnish furniture brand Artek, stands out. Colorful Aalto Chairs ― over 8 million have been sold since their launch in the 1960s ― designed by Alvar Aalto, are piled up on one side. They are not just for looking but for sale as well.