Cheonan, South Chung­­cheong Province ― Fish cakes in broth are a common sight on Korea's streets and markets. But some fish cakes come from a place you might not expect: a foreigners’ prison.

The Asian delicacies are cranked out by prisoners at Cheonan Foreigner Prison in mountainside outskirts of Cheonan, South Chungcheong Province.

You won’t find these fish cakes at your local market, however: They are not sold to the general public but distributed to prisons run by the Korean Correctional Service. 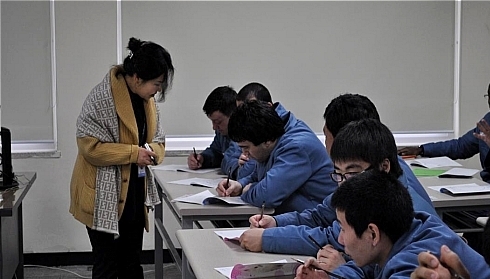 About 700 inmates from China, Nigeria, Russia and other countries are serving their time at the prison, 80 kilometers south of Seoul.

Originally a juvenile penitentiary, the prison has a rather unconventional approach to running a facility that houses convicted murderers, drug dealers, sex offenders and scam artists.

During their sentence at the prison, inmates are given paid work, taught how to dance, play the ocarina, paint and other lessons in culture.

When foreign inmates first come to the prison, manned by more than 200 guards, they attend a mandatory orientation program, Good Morning Korea, which introduces basic Korean through nursery rhymes and folk songs.

According to Kang Yong-soo, a guard at the facility, “Good Morning Korea” acts as an effective buffer to help new inmates adjust to prison life.

But the Korea Correctional Service did not always have an easy time dealing with foreign inmates.

Language created the bulk of the problems.

“There were a lot of language-related problems that arose, because prisons were unable to focus their attention on addressing the language needs of each person,” said Lee Jae-ho, the rehabilitation officer at the prison.

Kang said religious and cultural problems arose as well, a common example being the dietary restrictions of those in the Islamic faith.

Another complaint of the prisoners before the opening of the Cheonan prison, was the lack of opportunities for inmates to work in factories alongside Korean inmates. Factory owners had difficulty teaching work-related skills to foreigners, and chose to hire Korean inmates instead.

Being the minority also caused problems for the inmates.

“Before this facility was created, the foreigners were the minority in prisons and they had strong feelings of victimization, which led to animosity toward the prison guards and Korean prisoners,” said Lee. 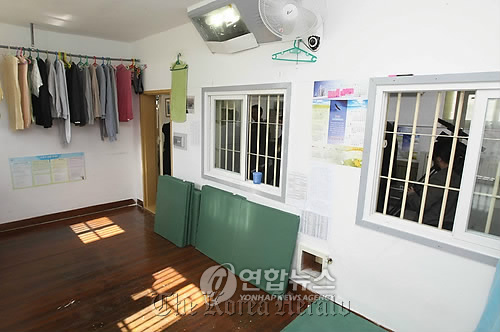 The interior of a prison cell. (Yonhap News)

As soon as the prison was designated for foreigners, simply going from minority to majority made a big difference in a number of areas for the inmates.

“Since foreigners are the majority, the feelings of victimization just naturally disappeared, and they are very cooperative and the Koreans and foreigners have developed a helping relationship,” said Lee.

Kang also noticed a change in the inmates’ judgments of Korea, losing the feeling of animosity toward the country and its system.

With inmates from 33 countries all over the world, cultural acceptance has grown considerably within the prison population, which helped to address concerns over religious discrimination, according to Lee.

The prison also offers three different styles of meals to cater to the diverse population ― western style includes anything from bread, cheese and jam to hamburgers while the Islamic selection can include fried fish cutlets.

Able to work in factories surrounding the facility, inmates work hard to make the most of their time here.

According to prison officials, the prisoners make anything from shopping bags to toner, making an average of 200,000 won ($177) a month. Prisoners have personal accounts at the prison, and can spend their money on a wide range of stationery, food, clothing and other daily supplies.

Most inmates work hard to save their money.

According to an unnamed prison guard, there are inmates that leave with a few million won, a considerable amount depending on their home country.

Employment at the prison is based on a level system, where inmates start by making shopping bags, and move up the ladder if they work hard. Pay ranges change as well, depending on the unit cost of the product.

The programs have been a great success for the prison.

More than 80 percent of the prisoners enjoy “Good Morning Korea,” and 70 percent enjoy other special programs as well, Kang said.

“The level of satisfaction is quite high.”

Some are concerned that the prison’s expenditures outweigh the benefits.

According to a Chinese prisoner as quoted by a prison official, the facilities here are as good as “middle-class” hotels in China, raising questions about how comfortable it is for the inmates. Chinese and Taiwanese nationals make up the majority of inmates at Cheonan.

“These people have committed crimes against our people, spend our tax money to eat, sleep and have fun while in prison, and eventually leave our country with plenty of money set aside,” a Korean woman in her 20s said.

“Some can see this as a chance to do whatever they want in our country and then simply spend a jolly time in prison,” said another Korean woman also in her 20s.