On a typical winter day, the Bard of Brooklyn’s Boerum Hill steps out onto the sidewalk to go to work. He wears only a light jacket; walks by eucalyptus trees, not delis; past charming suburban yards, not gritty subway stops. It’s Jonathan Lethem, one of New York’s most high-profile novelists, and he’s far from Brooklyn’s snow-filled sidewalks: he’s transplanted himself to Southern California.

In late 2010, the 46-year-old Lethem, his wife and two young sons moved into a sprawling midcentury home in Claremont so Lethem could begin teaching at Pomona College.

The move surprised many, in part because Lethem, a MacArthur “genius” Fellow, has made New York and its landscapes the center of his work ― “Chronic City” (2009), “Fortress of Solitude” (2003) and 1999’s “Motherless Brooklyn,” which Lethem calls “an all-out Valentine” to New York. Before the move west, Lethem lived on the same street where he was raised. “That environment was, for me, like constant nostalgic LSD,” he says.

Simultaneously, Brooklyn became a literary hot spot. “Brooklyn is repulsive with novelists, it’s cancerous with novelists,” Lethem says. Jhumpa Lahiri, Gary Shteyngart, Paul Auster and Rick Moody all live in Brooklyn, and there was an unfortunate cluster of writers named Jonathan (among them Lethem, Safran Foer and Ames). “That can sometimes be too much,” Lethem says of the literary scene, “when you need to also be inside yourself, exploring your own meandering feelings, not dictated by your environment, but dictated instead by what you read that day, or something else.”

As much as Lethem’s novels evoke the real-world texture of New York, they also inhabit a deep and personal dreamscape. The scenes of a Jewish boy’s tribulations on the streets of 1970s Bed-Stuy in “Fortress of Solitude” (very real) are offset by a magic ring that enables him to fly, comic-book style (not real at all).

What some have read as Lethem’s faithfulness to place has, in fact, been enabled by distance. “I wrote most of ‘Fortress of Solitude’ living in Toronto,” he says. 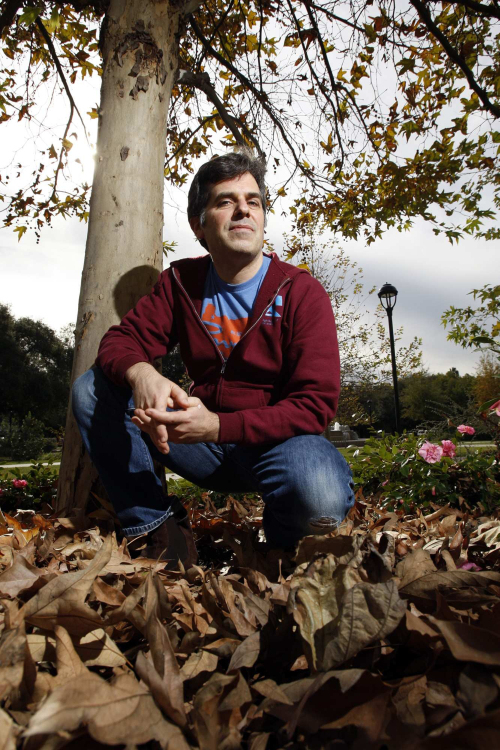 Novelist Jonathan Lethem at Pomona College, in Claremont,California, where he teaches. (Los Angeles Times/MCT)
Lethem’s office is located in a two-story, Spanish-style building on the college campus, where he began teaching this spring as the Roy Edward Disney ‘51 Professor of Creative Writing. It’s a rare position in the creative writing world ― well-compensated, a light and flexible teaching load ― but somewhat fraught. David Foster Wallace, the brilliant author of “Infinite Jest,” was the first writer to accept the appointment, in 2002; after he committed suicide in 2008, college officials took some time before finding his replacement.

“It was very tender, because Wallace loomed so large here,” Lethem says. “It’s an unfixable wound that they suffered. The idea that I might be part of the moving on seemed like an honor.”

Kevin Dettmar, chairman of the Pomona English department, says Lethem brings an array of talents to the school. “I’m excited that Jonathan’s joining the English faculty, not just as a novelist or creative writer, but as someone involved in film and music. I think he’ll really be part of the intellectual conversation that happens here.”

Although he has been a visiting writer in many places, including programs at Columbia and NYU, Lethem’s move to Pomona is qualitatively different. “I’ve never made a commitment to an institution, to a department,” says Lethem. “I’ve never had colleagues in the sense that I do here.”

“Being in the classroom is very familiar, it’s a situation I like a lot. It’s why I could dare to make this commitment,” he says. At Pomona, Lethem will be teaching a writing workshop and another class, a seminar. This spring, that seminar will include books by Julio Cortazar, Kazuo Ishiguro and Christina Stead ― “a tiny homage to Wallace,” Lethem says. Stead’s novel, “The Man Who Loved Children,” was on a Wallace syllabus that has been widely circulated on the Internet. But Lethem, whose sensibilities overlap with Wallace’s, adds, “It’s also a book I’m crazy for.”

Like any writer, Lethem has filled the bookshelves in his office. But the decor reflects a curiosity that extends beyond books ― a record player sits in the corner; a messy piece by contemporary artist Raymond Pettibon is pinned to a bulletin board.

A longstanding restless intellect ― and a willingness to engage in cultural critique ― sets Lethem apart from many contemporary novelists who tend to confine themselves to writing novels. In 2010, Lethem published “They Live,” a short book that’s part criticism, part personal essay, about John Carpenter’s 1988 film. He’s written major pieces for Rolling Stone. He served as editor for the Library of America’s anthology of work by Philip K. Dick, the first science fiction writer to be honored by the publisher. And a cleverly structured 2007 essay for Harper’s, “The Ecstasy of Influence,” launched Lethem into the middle of a heated debate on appropriation, emulation and copyright.

That essay will be the centerpiece of his next book, “The Ecstasy of Influence: Nonfictions, Etc.,” a collection coming from Doubleday in the fall.

“I’m trying to do a Lethem equivalent of Norman Mailer’s ‘Advertisements for Myself,’” he says. “This book is the full-on embrace, as in the embrace of someone standing on a highway and embracing a Mack truck, of the realization that I am fatally self-conscious and that will have to be accounted for.”

Lethem admits that his first books ― “Gun, With Occasional Music” (1994), “Amnesia Moon” (1995) ― showed the strong influence of Dick’s mind-bending fiction. In his new book, Lethem says, “I want to drag the evidence of how I came up with this stuff into view. But that itself becomes a form of connection, communion.”

For Lethem, who uses words as his primary tool ― whether he’s writing fiction or about music or film or the latest bend in intellectual culture ― reading is a kind of “Vulcan mind meld ... you’re alone with another person’s brain, by remote control.”

That is the thrill of reading, and it’s also a thrill of writing. From the beginning, Lethem says, “I was trying to force my dreams into other people’s skulls.”

His earliest books were written while he was a bookstore clerk in Berkeley. Indeed, after an incomplete turn at Bennington College, Lethem moved to Northern California, following the path of Beat generation writers. “My experience living in the Bay Area is both relevant and irrelevant,” he says, to the move he made now.

Instead, it may be the dreamscapes that are the most meaningful to his new life in Southern California ― having read everything by Raymond Chandler and Ross Macdonald. “I’ve always been, in a way that was almost despite myself ― or unconscious, uninvited ― interested in the projections of Southern California,” Lethem says.

“Apart from being very happy in Claremont, I’m excited to be in Southern California, such a charged, allegorical place for me,” Lethem says. While he hasn’t been here long enough to develop, as he puts it, “a personal myth of my relationship to the place,” he has to admit, “I’ve been thinking about it at a distance for a long time.”

Now that he’s here, he can experience the tangible reality of the place ― the sunlit walk into town to get a sandwich, maybe even use the pool behind his house once it warms up. His imagination is elsewhere ― 1950s Queens, the setting of his next novel.