MARANA, Arizona (AP) ― The slow road back for Tiger Woods took another detour Wed-nesday when he followed a clutch birdie with a shocking shot into the desert and lost to Thomas Bjorn in the first round of the Match Play Championship.

It was only the second time that Woods, the No. 3 seed, had been eliminated in the first round.

But this was stunning even to Woods.

Moments after he made an 8-foot birdie putt on the 18th hole to extend the match, he hit a 3-wood so far to the right that it landed in a desert bush. It took two shots just to get it back onto the grass. After badly missing an 18-foot bogey putt, he conceded to Bjorn. 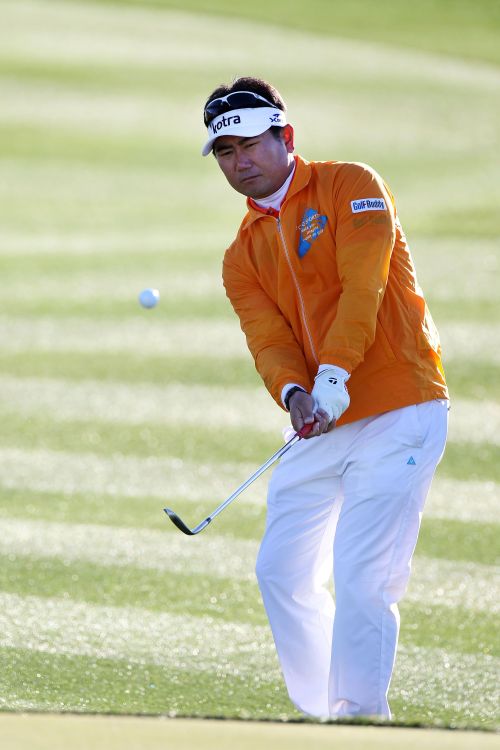 Twice he had simple chips on the back nine and failed to convert them into birdies, losing his lead on the 13th and falling behind on the 15th. He missed a 10-foot birdie on the 17th that he figured he should make “every time.”

And then came No. 1, the first extra hole.

“It’s easy to put the ball in the fairway and I couldn’t even do that,” Woods said, so visibly upset that he was stumbling over his words.

The other top seeds didn’t have that much trouble.

Top-ranked Lee Westwood never trailed in his 3-and-2 victory over Henrik Stenson, while PGA champion Martin Kaymer had the shortest match of the opening round, a 7-and-6 win over 19-year-old Noh Seung-yul of South Korea.

Phil Mickelson, the No. 4 seed who only decided to play this World Golf Championship two weeks ago, won 6-and-5 over Brendan Jones.

Woods had some company in going home early. 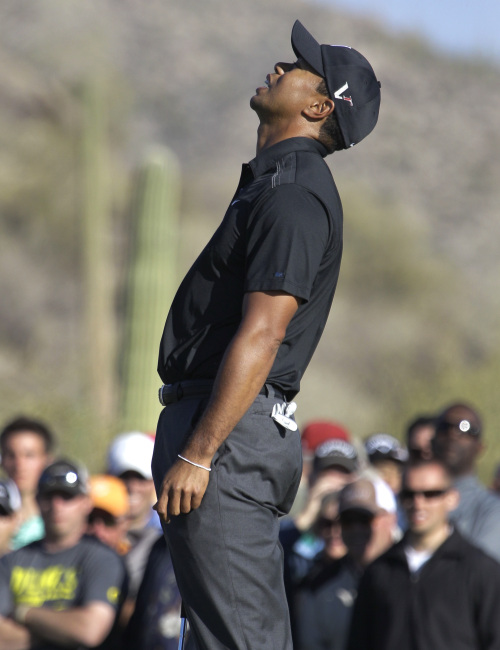 Tiger Woods reacts after missing a putt on the 17th green. (AP-Yonhap News)
The Americans had four of the top 10 seeds at Dove Mountain, and Mickelson is the only one left. Matteo Manassero, the 17-year-old Italian, became the youngest winner in this tournament with a 2-and-1 victory over eighth-seeded Steve Stricker, while Jim Furyk (No. 10) continued his struggles in losing to Ryan Palmer, who was making his Match Play debut.

The wild first day finally ended with a record eight matches going into extra holes, and four others going the distance. Of the 32 players remaining, 13 are Americans, 13 are Europeans and two each are from Australia, South Africa and Asia.

Coming off the worst season of his career, most of that from the crisis in his personal life, Woods does not appear to be making quick progress. Through three tournaments this year, he has failed to crack the top 20.

Woods keeps talking about needing more repetition as he works on a new swing, although he is not playing more tournaments. Asked if he might add the Honda Classic, Woods replied, “Probably now is not the time to ask me right now.”

He next is likely to play the Cadillac Championship at Doral in two weeks, with Bay Hill two weeks after that. One possibility is the Transitions Championship outside Tampa, Florida, which is the week between Doral and Bay Hill.

It was the second time Bjorn has beaten Woods head-to-head, although not in this format. Ten years ago, they went 72 holes together in the Dubai Desert Classic, with Woods putting his shot into the water on the last hole to make double bogey.

Bjorn was gracious in victory, saying that Woods is not playing “his absolute best right now.” although he still saw some good swings.

When asked about the youth movement in golf, especially after Manassero won his match, Rory McIlroy said all the young players feel they are good enough to compete with the likes of Woods, Mickelson, Stricker and Furyk.

“I mean, I don’t think Tiger and Phil have got any ... well, yeah, I mean I don’t think Phil has gotten any worse,” McIlroy said after his 4-and-2 win over Jonathan Byrd. “Tiger isn’t as dominant as he used to be, and Phil won the Masters last year.”