MARANA, Arizona (AP) ― More than ever, the World Golf Championships are living up to their name.

The series enters its 13th year when the Match Play Championship gets under way Wednesday at Dove Mountain with Lee Westwood of England as the fifth player to occupy the No. 1 seed in the 64-man field.

There are players from 15 countries, which is not unusual or even a record. But as the boundaries of golf become more blurred, there is a certain vibe in the high desert north of Tucson that a rivalry is taking shape ― not between two players, but two continents.

The Americans have the most players in the 64-man field with 25.

The Europeans have the highest-ranked players ― eight of the top 16 seeds, led by Westwood and Martin Kaymer.

And it was only last year when Ian Poulter defeated Paul Casey in an all-England championship match, the first year that no Americans reached the semifinals since the Accenture Match Play Championship began in 1999. That kicked off a golden year for Europe, in which it won the Ryder Cup and had two players win majors. 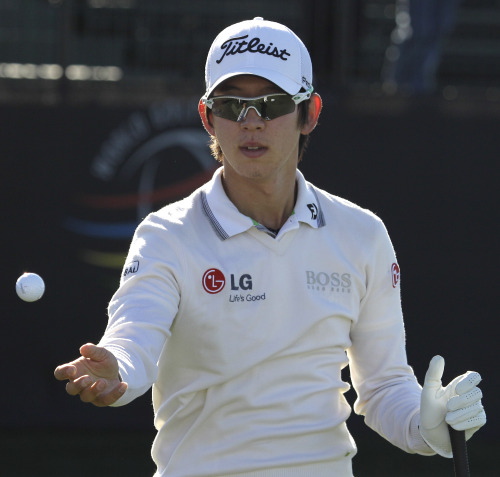 Korea’s Noh Seung-yul takes part in a practice round ahead of the Accenture Match Play Championship. (AP-Yonhap News)
“It might have been a surprise to some, but it certainly hasn’t been a surprise if you look at the rankings over the last couple of years, at how well the European players have played,” Poulter said. “It would surprise me at all to see something similar happen this year with how you look at the world rankings. European players are very, very strong.”

Fueling the seeds of a rivalry were the decisions of Westwood, Kaymer and Rory McIlroy ― all among the top 10 in the world ― not to take up PGA Tour membership this year. Westwood and McIlroy later said they wouldn’t not go to The Players Championship, the richest tournament in golf with traditionally the strongest and deepest field.

Graeme McDowell thinks some of it is overcooked.

“I don’t think there’s any antagonism there,” McDowell said. “The best players in the world want to play against each other as often as possible.”

The players are going about their own business this week, and Kaymer spoke well when asked if he were representing Germany or the European Tour at the Match Play Championship.

“Representing myself,” he said, sitting behind four small, German flags. “I belong to both, obviously more to Germany.”

And while players are worried only about getting past the match in front of them, there is no denying a certain pride among Europeans to get as many players as deep into the tournament as they can. It means more to Europe than it does the United States, mainly because the PGA Tour is a melting pot of just about every golfing nation.

If there is a rivalry, it will be difficult to ignore on opening day at Dove Mountain.

The 32 matches on Wednesday starts off with Poulter, the defending champion, taking on Stewart Cink, who has reached at least the quarterfinal round in each of the last three years.

That will be the first of 10 matches that pit the United States against Europe, which includes Tiger Woods against Thomas Bjorn, and McIlroy against Jonathan Byrd, who has won twice in the last five months.

Woods did not arrive to play The Ritz-Carlton Club at Dove Mountain until Tuesday afternoon. He has not been here in two years, when he lost to Tim Clark in the second round in his first tournament back from knee surgery.

“Got to take it one match at a time, one opponent at a time,” Woods said. “I have got Thomas tomorrow. He won a tournament, what, three weeks ago? He’s obviously playing better.”

Westwood opens with Henrik Stenson, who got into the field as the first alternate when Toru Taniguchi withdrew. Kaymer faces South Korean sensation Noh Seung-yul, while Phil Mickelson, the No. 4 seed, opens with Brendan Jones of Australia.

Westwood has never made it beyond the second round in all his years playing this event, which he figures is more a matter of coincidence. Even so, he realizes this could be one of the shortest weeks of his year if he isn’t sharp, or he happens to run into an opponent who never misses a putt. Stenson won the Match Play in 2007, the first year it moved to Arizona.

“I’m wondering what Friday looks like in this tournament,” Westwood said.

Predictions are never more hopeless than at the Match Play Championship.

Three years ago, two reporters studied the brackets and challenged each other to find one match they could bank on. Without conferring, both settled on Vijay Singh over Peter Hanson.

“Seriously, maybe 10 or 15 years ago, it may have made a difference if you were No. 1 or No. 64 in the world rankings,” Kaymer said. “But these days, I don’t think it will make any difference. If he’s from Korea, from Sweden, from England, from America, it doesn’t really matter, I think.”

But if it’s the United States against Europe, it carries a little more edge these days.