After toiling in a baseball netherworld for almost three years, Kim Byung-hyun, a former Major League Baseball All-Star from South Korea, is trying to get back on his feet in Japan.

Kim, 32, signed with the Rakuten Golden Eagles in the Nippon Professional Baseball last month, and as the team was preparing for the upcoming season here in Okinawa, the right-hander sounded like a kid in a candy store.

“I can hardly communicate with the guys at the camp, but just being around them feels pretty good in itself,” Kim said during a break from his training. “Now that I have my glove back on, I am going to pitch as well as I can.”

In January, Kim inked a one-year deal worth $396,165, and during the spring training camp the submarine pitcher is competing for the closer’s job for manager Senichi Hoshino.

Kim said he is still not completely satisfied with himself. 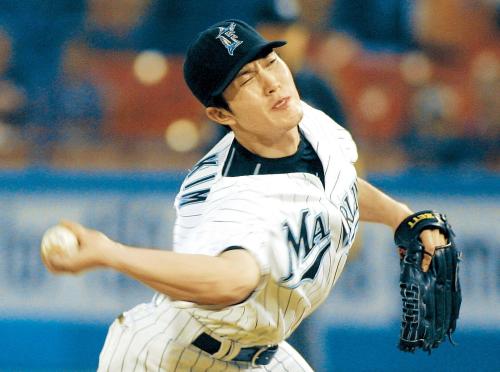 Kim Byung-hyun is the only Korean player to have won a World Series ring. (File photo)
“I don’t know what (the manager) said about the closer role but I am not ready yet,” Kim said. “I am trying to find the rhythm I had when I was doing well in the majors. I am getting there.”

Kim made his major league debut with the Arizona Diamondbacks in 1999. Over a nine-year MLB career with four clubs, Kim put up 54 wins and 86 saves along with a 4.42 ERA in 394 games.

After ending 2007 with the Florida Marlins, Kim never returned to the big leagues. In the spring seasons of 2009 and 2010, Kim joined the Pittsburgh Pirates and the San Francisco Giants, respectively, only to be released before the season started. He spent last year with the Orange County Flyers in the U.S. Golden Baseball League, an independent league not affiliated with the majors.

Despite his protracted absence from competitive baseball, Kim said he has never lost his confidence.

“I’ve always been confident on the mound,” he said. “It’s just that I didn’t like the way I pitched and I simply relied on my body and rhythm. Over three weeks here, I think I’ve learned things I didn’t know while taking almost three years off.”

Kim said if the stint with the Golden Eagles is his last as a ball player, he wants to go out on a good note.

“When I do retire, I want to quit knowing I had thrown as well as I could,” he said. “I want to pitch confidently so that even when I get tagged for home runs or hits, it will not be because I pitched poorly but because the hitter swung the bat well.”

Kim is among five South Koreans in the NPB this season, joining ex-major leaguer Park Chan-ho and Lee Seung-yeop of the Orix Buffaloes, Kim Tae-kyun of the Chiba Lotte Marines, and Lim Chang-yong of the Yakult Swallows.

In the United States, Kim won the World Series with Arizona in 2001, despite giving up a pair of walk-off home runs to the New York Yankees in the seven-game series. Kim earned his second World Series ring with the Boston Red Sox in 2004. He remains the only South Korean player with a World Series title. (Yonhap News)