Now, historians are poring through the 69 newly discovered books and five others the school already knew about, and librarians are searching the collection for more volumes that may have belonged to the founding father.

Even if no other Jefferson-owned books are found, the school’s collection of 74 books is the third largest after the Library of Congress and the University of Virginia.

“It is so out of the blue and pretty amazing,” said Washington University’s rare books curator Erin Davis of the discovery that was announced on the U.S. holiday of President’s Day.

The books were among about 3,000 that were donated to the school in 1880 after the death of Jefferson’s granddaughter, Ellen Wayles Randolph Coolidge, and her husband, Joseph Coolidge.

There was no indication at the time that any of them had belonged to Jefferson. But it turns out that two years after Jefferson’s 1826 death, his library of 1,600 books was sold to settle debts. Ellen Coolidge’s grandfather helped oversee her schooling when she lived at his mountaintop estate at Monticello when she was a teenager and young adult. 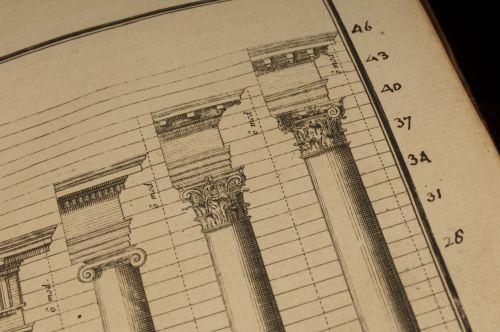 Notes made by Thomas Jefferson in the margin of an architecture book scholars say was used by Jefferson to design the University of Virginia. (AP-Yonhap News)
She was eager to acquire some of her grandfather’s books, and her husband wrote her brother-in-law, Nicholas Trist, and told him what they wanted him to buy them at the auction. They were particularly interested in books that contained Jefferson’s notes or other marks.

“My dear N. ― I beg you to interest yourself in my behalf in relation to the books; remember that his library will not be sold again, and that all the memorials of T.J. for myself and children, and friends, must be secured now! ― this is the last chance!” the letter reads.

Two researchers, Ann Lucas Birle and Endrina Tay, began searching for what became of the couple’s library last year. The researchers’ big break came in October, when they learned the Coolidges’ daughter and son-in-law had a relationship with one of the founders of Washington University and donated the books to the school.

In the hand-pressed books that were common in Jefferson’s day, printers would place the letters of the alphabet ― called signatures ― at the bottom of some pages so that when the books were bound, the pages would be placed in the correct order. One way Jefferson marked his books was to place a small “T” in front of one of the “I” signature, which was significant because “I” is “J” in the Latin alphabet.

”It was a little bit of detective work,” said Anne Posega, head of special collections at Washington University Libraries.

Scholars traveled to St. Louis last week and spent three days confirming the books had belonged to Jefferson, the primary author of the Declaration of Independence. They never imagined they would find the books in one place.

“I think the assumption was either they were with the family or dispersed,” Tay said.

Among the significant finds is an architectural book that Jefferson consulted when he designed the University of Virginia.

Jefferson didn’t write in his books as much as some of his contemporaries, but his handwriting is clearly visible in the book.

In another book, they found a small scrap of paper with Greek notes in Jefferson’s hand.

A few of the volumes have been placed on display, and the school is welcoming Jefferson scholars to review the newly discovered books. But the search is far from over.

“We think we are going to find more treasures,” Tay said.