How does this sound for a quick breakfast:

A single pancake, topped with 1 tablespoon each of reduced-fat tub margarine and reduced-calorie pancake syrup. Two slices of Canadian bacon. An 8-ounce glass of skim milk. A cup of coffee with 1 tablespoon of half-and-half.

Congratulations. You just ate 1,254 milligrams of sodium before you even left the house.

When the U.S. Department of Agriculture released its new Dietary Guidelines for Americans in January, the firmer recommendation for who should lower their sodium was eye-catching: Reduce your daily sodium intake to 2,300 milligrams, or 1,500 milligrams if you fit into any of those risk categories. Americans average 3,400 milligrams of sodium a day.

You might groan, but Cheryl Kuhta-Sutter, a registered dietitian with Presbyterian Heart & Wellness in Charlotte, North Carolina, is delighted.

Despite its role as the new dietary Simon Legree, salt is our friend. In cooking, it enhances flavors, preserves foods and even inhibits microbial growth. Without salt, bread rises too fast and cookies don’t taste as sweet.

In our bodies, it regulates fluids, makes our nerves and muscles function, helps us digest food and carries nutrients in and out of cells.

Along with water, it’s the one thing we can’t eliminate from our diets. We can live without fruits, vegetables or meat. But we can’t live without salt. 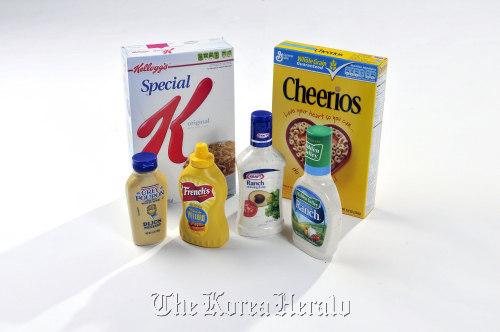 The warnings on salt are dire, with more than half of Americans urged to cut back. Yes, most salt is in products, but which ones? And what are the tricks to using less in cooking and eating?  (Charlotte Observer/MCT)
Still, too much salt can quickly become too much of a good thing. A diet high in sodium leads to high blood pressure and eventually heart disease.

Sheryl Forbis of Carrboro, North Carolina, got a first-hand look at that. Several years ago, her husband, Dick, discovered he had borderline high blood pressure. Dick Forbis, a retired chemist who had worked in pharmaceutical research, had no desire to take blood-pressure medications.

So Sheryl tackled salt. She came up with her own formulas for things like dressing and ketchup, to avoid the sodium in commercial versions. She started cooking with more herbs and less salt.

Within two weeks, Dick’s blood pressure was back in the safe range. Today, the Forbises have a hard time eating out ― everything tastes too salty, she says.

“Your palate gets used to not having the salt,” she says. “It didn’t take very long. A couple of weeks.”

“You’re going to eat less salt if you eat from the outside edges of the store,” she says. “I don’t use a lot of packaged food. There’s almost nothing on the shelves, unless it says no-salt-added, that I buy. I use coupons just like everybody else, but I read labels.”

Clonnie Smith, 69, has turned label-watching into an art. A retired architectural consultant and a self-described “Southern boy” who lives in South Charlotte, North Carolina, he had diabetes and high blood pressure.

He got serious about tracking salt about six months ago. He used a USDA list of sodium in common foods to develop a spreadsheet and he tracks his blood pressure daily.

Since his wife does most of the cooking, “I’ve had to train her,” he says. “A lot of it is how we shop. Like, we don’t eat any processed foods. We eat very little deli meat or sausage or bacon. Canadian bacon is just loaded ― two slices of that and you’ve blown it for the day.”

Smith trained himself to focus on the real tastes of things.

“I concentrate on what I call a ‘stand-alone’ taste. A pecan has a distinctive taste and doesn’t need salt on it.”

Susan Batten, a chef-instructor at Johnson & Wales University, says that appreciation of what things really taste like is a key to lowering salt in cooking. Her students come to school with their taste buds already turned up for salt and sugar from snacks and convenience foods.

“Salt is kind of an acquired taste, so you can unacquire the taste,” she says. “If you cut back on salt, you need to enhance the flavor by using other natural flavor enhancers.” Fresh citrus juices, such as lime or lemon, or different flavors of vinegar help replace salt.

She also teaches students to use cooking techniques to build flavor, such as pan-searing, braising and stewing. And learn to season properly, she says: If you taste salt, you’ve used too much.

The easiest way to reduce your salt intake is to cook for yourself, says dietitian Cheryl Kuhta-Sutter. Making a weekly meal plan will really help, she says.

If you do most of your cooking from scratch, you may not need to worry that much about salt. According to the Mayo Clinic, 77 percent of sodium comes from packaged and prepared foods.

Still, it’s a rare kitchen that doesn’t use some prepared ingredients. And salt can come from surprising places. In a recent survey of supermarket products, The Observer found some startling numbers. For instance, Grey Poupon Dijon mustard has a whopping 120 milligrams of sodium in a teaspoon, compared to 55 milligrams in a teaspoon of French’s Classic Yellow. Since most recipes with Dijon use at least 1 tablespoon, that’s 360 milligrams from a single ingredient.

Most people know canned soups and vegetables can be high unless you use no-salt-added versions. But check out the spaghetti sauces: 510 milligrams in a 1/2 cup of Ragu Organic or Bertolli Traditional Tomato & Basil, and 550 milligrams in Newman’s Own Marinara.

Even with healthful products, you have to read the labels carefully: The reduced-fat or reduced-calorie version of a product usually has more sodium than the regular version.

Evaluating products by serving can be hard, says Kuhta-Sutter, because it depends how the food fits into your entire day’s diet. While the Food & Drug Administration defines a low-sodium food as one with less than 140 milligrams per serving, an entree or a main-dish serving might be higher because it accounts for a larger part of your diet. In general, she says, when you compare foods, pick the one with lower sodium.

How she cut the salt

Sheryl Forbis taught herself tricks for cutting salt when her husband needed to reduce his blood pressure:

Put away the salt shaker and train yourself not to add salt at the table.

Make your own soups and freeze them rather than use canned soups. She adds 2 tablespoons of cider vinegar to meat-based soups to replace the flavor of salt.

For a ketchup substitute, mix tomato paste with a pinch of brown sugar and a little cider vinegar.

Since cheese is high in sodium (unless it’s a low-sodium cheese), use it as a garnish rather than the focus of a dish.

Since prepared salsa is high in sodium, make salsa with a few chopped tomatoes, a garlic clove, onion, sweet and jalapeno peppers, fruit (fresh peach or pineapple), a squirt of lime juice or balsamic vinegar and dashes of cumin and chili powder.