He’s not shy about saying that, either. Though they all count the same in the marathon 82-game schedule, games after the All-Star break just seem to carry more weight in James’ mind. The reason is simple: With every passing game, he’s that much closer to returning to the playoffs ― and resuming his still-unfulfilled quest of winning an NBA championship.

Miami opens its post-All-Star schedule Tuesday at home against Sacramento. This time of year is often called the second half, but it’s more accurate to depict it as the final third, since the Heat have just 26 games left before the opening postseason round begins.

James has been saying for weeks that he starts getting into playoff mode after the break. 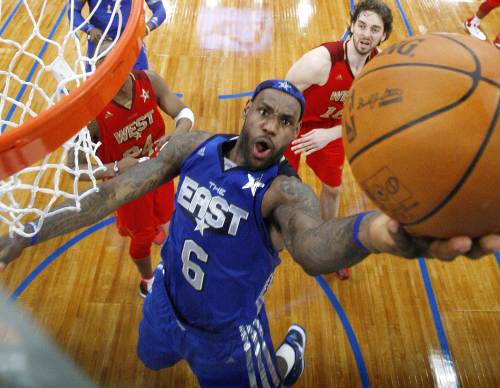 Miami Heat’s LeBron James drives to the basket during the All-Star game over the weekend. (AFP-Yonhap News)
The Heat can’t wait to see what that really means.

“We’re still learning each other,” James said. “Our record is really good and we’re excited about our record, but we understand, we’ve still got to continue to get better.”

He’s the league’s two-time reigning MVP, a title that he was widely expected to relinquish this season in exchange of pursuing, well, another title. With Dwyane Wade and Chris Bosh alongside him in Miami, many people ― James included ― thought he would be unlikely to put up MVP numbers for a third straight year.

But James’ stats have gotten better each month. Scoring is up. Rebounding is up. Assists are up.

And the strange part is, he’s doing it while the productivity for Wade and Bosh has increased as well, making Miami look more and more like a championship contender as the year rolls along.

“Here’s what’s interesting. As his personal numbers have increased the last few weeks, what’s important is our level of team execution and trust and confidence has also increased,” Heat coach Erik Spoelstra said. “As long as those two things can work in concert, we’re all for it. We’re talking about an MVP, a two-time MVP, who is so dynamic and versatile with his skills he can impact the game in so many ways.”

Just look at Sunday night’s All-Star Game as proof of that. The Eastern Conference may have lost to the West All-Stars, but James still managed a triple-double―29 points, 12 rebounds and 10 assists.