Lobo had a special dinner with Choue Chung-won, president of the World Taekwondo Federation and other officials from the sport governing body on the Korean leg of an Asian tour also including Singapore and Kuwait. 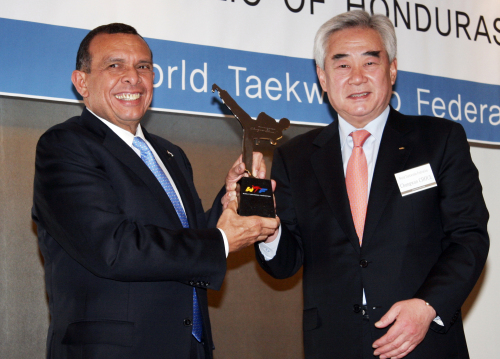 World Taekwondo Federation president Choue Chung-won (right) presents a statue to President Porfirio Lobo Sosa at the Renaissance Seoul Hotel on Sunday. (Yonhap News)
The president, who holds a third dan black belt in taekwondo, said he has been practicing the Korean martial art since 1986 under Grandmaster Song Bong-kyung.

“I have learned discipline, courage and perseverance through the teachings of Grandmaster Song and that is why I have a special love for taekwondo,” he said.

Grandmaster Song, who died in 2008, went to Honduras to teach taekwondo. Now the South American country of around 8 million people has some 10,000 taekwondo practitioners, according to the WTF.

“I’m asking our Honduran youngsters to practice taekwondo as it gives them peace of mind,” he added.