Finance ministers and central bank governors of the world’s 20 major economies agreed to narrow the list of economic indicators to detect signs of imbalances in their first meeting of the year over the weekend. The so-called “indicative guideline” includes public debts, fiscal deficits, private savings and private debt.

“It is a major achievement that the G20 reached an accord on how to measure imbalances through policy coordination,” Yoon said in Paris, ending the two-day meeting.

“The focus of the meeting was about coming up with right barometers to resolve global imbalances. It was challenging to specify the list but a compromise plan from the Korean officials helped to resolve the problem.”

The G20 is a gathering of 20 of the word’s dominant and emerging countries that seeks to coordinate economic policies to prevent global recession.

The accord is a development from the G20 Seoul Summit on Nov. 11-12, where heads of state committed themselves to pursue policies to maintain trade balances at an undefined “sustainable level.” 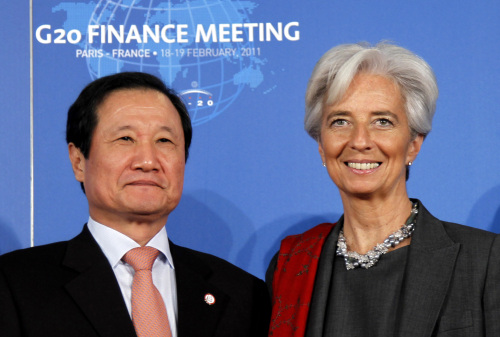 Finance Minister Yoon Jeung-hyun (left) poses with French Economy Minister Christine Lagarde before a meeting of G20 finance ministers and central bank governors in Paris on Saturday. (AFP-Yonhap News)
The next step, is to turn the preliminary list into a set of guidelines for economic policies in mid-April when the group meets again.

“What barometers to use and to what extent, will be discussed from now onwards. We hope to finalize the list by April,” Vice Finance Minister Shin Je-yoon said.

Yoon credited the mediator role Korean officials played. No country opposed to the idea of including public debt, fiscal deficits, private savings and debt on the list but there was conflict between some advanced nations and China about using current account levels as a barometer, he said.

China, along with other major exporters such as Germany and Japan, opposed the U.S.-led idea of restricting current account surpluses as a way of rebalancing the world economy. China also refused to include currency reserves on the list, as the idea would require the world’s second-largest economy to shrink its $28 trillion of dollar reserves.

The U.S. is required to cut its massive current account deficit and increase exports to ease the imbalance.

The compromise plan prepared by Korea excluded current account and included trade balance, flow of investment and transfers. The modified list was said to have been accepted by the Chinese after an overnight meeting on Saturday.

The current account is the broadest measure of a nation’s trade and investment balances. Big exporters are wary of committing themselves to monitoring of this figure as decreasing it would require them to cut exports and strengthen their currencies.

Korea’s current account surplus is 3 percent of the GDP. Analysts expect the figure to decrease to 2.3 percent this year.

The Finance Ministry will release the latest monthly current account and consumer sentiment this Friday.

Yoon urged leaders to continue their efforts to stabilize the global financial system.

“The financial system needs to maintain stability to strengthen the real economy and reduce global imbalance,” he said in a seminar held on the sidelines of the meeting.