This concept is the foundation for contemporary Japanese designs in product manufacturing.

The Japanese Embassy along with the Korea Foundation are holding an exhibition that brings together this harmony under one roof at a very important time. 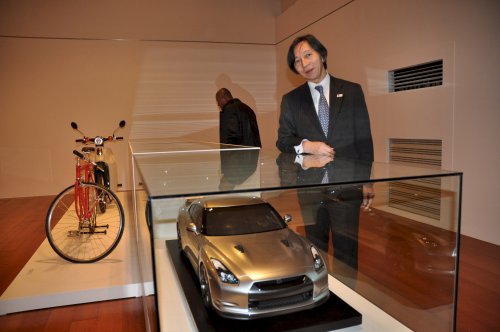 Japan Ambassador Masatoshi Muto with to a replica of the Nissan GT-R. (Yoav Cerralbo/The Korea Herald)
This year marks the 20th anniversary of the establishment of the Korea Foundation.

“I find it especially meaningful that our first celebratory event has been made possible through the close cooperation with our long-standing partners, the Japan Foundation and the Japan Embassy,” said Kim Byung-kook, president of the Korea Foundation.

“My mission is to serve as a bridge between the two countries in order to build a new era for Japan and Korea in the new 100 years,” he said.

By design, the Wa exhibition, which runs until March 19, attempts to bridge both cultures while introducing possibilities for collaboration in the industrial design sector.

Muto commented that he is very impressed by the rapid development of Korean industrial design and by the innovations of Korea industrial artists who are creating some of the most impressive designs in the world.

“I think it’s good to exchange these together,” he said.