The Korea-EU free trade agreement expected to come into force in July will benefit businesses, workers and consumers of both economies, Thomas Kozlowski, the new EU ambassador to Seoul, said Friday.

The European Parliament approved the landmark accord on Thursday. Korea seeks a parliamentary ratification during an extraordinary session which started on Friday after an over two-month lull.

“This FTA will open up Korean products to the EU economy which is biggest in the world with more than 500 million consumers and GDP of more than 12 trillion euros ($16.3 trillion),” Kozlowski told reporters. 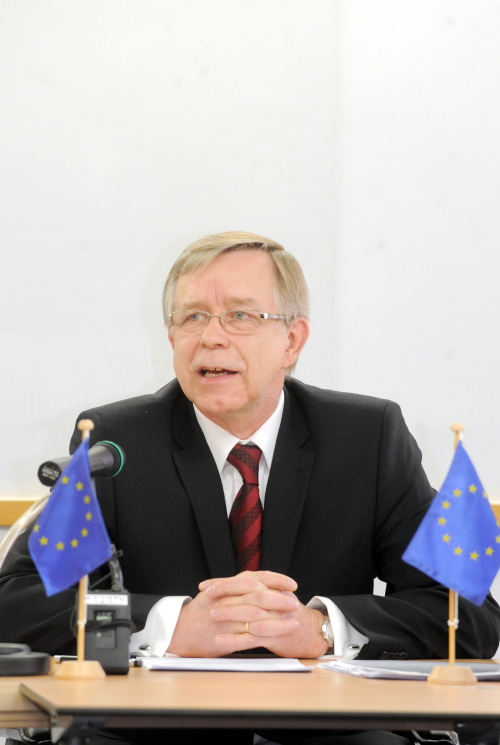 Thomas Kozlowski, the new EU ambassador to Korea (Ahn Hoon/The Korea Herald)
The deal would provide European companies with competitive edge over their U.S. rivals in Asia’s fourth largest economy. Korea’s textiles and chemical industries would benefit the most from tariff cuts under the agreement.

Seoul and Brussels signed the bilateral agreement on Oct. 6 after three and a half years of negotiations.

The European bloc’s first trade accord with an Asian nation stands to eliminate virtually all custom duties over the next five years. Under the pact, both parties agreed to phase out 96 percent of tariffs on EU goods and 99 percent of tariffs on Korean goods within three years from July onwards. Tariffs on industrial goods will be phased out in five years. Tariff cuts on some of farm products, subject to more trade protection, will take longer. Rice is completely excluded from the list.

The agreement will also create new market access in services and investment and will improve the business environment with advances in intellectual property protection, procurement, and competition policy, he said. Consumers will have access to a wider choice of goods at cheaper prices.

“For the European side, all things have been done for the provisional implementation of the deal as scheduled. I hope the ratification process will go smoothly and be completed as soon as possible before July,” Kozlowski said.

The pact is expected to increase Korea’s GDP by as much as 5.6 percentage points over the next decade, a joint report of the country’s state research institutes said.

Following Thursday’s endorsement in Europe, the Federation of Korean Industries urged the Korean government to swiftly ratify the pact signed with the EU.

“The FKI greatly welcomes the approval of the Korea-EU FTA by the EU parliament. It now urges the country’s parliament to quickly approve the bill on the Korea-EU FTA to help meet the target date of July 1 for its enactment that was agreed with the EU,” the nation’s most powerful business group said in a statement released Friday.