CAIRO (AP) _ Libyan protesters seeking to oust longtime leader Moammar Gadhafi defied a crackdown and took to the streets in five cities Thursday on what activists have dubbed a ``day of rage,'' amid reports at least 20 demonstrators have been killed in clashes with pro-government groups.

An opposition website and an anti-Gadhafi activist said unrest broke out during marches in four Libyan cities _ Beyida, Benghazi, Zentan, Rijban and Darnah. Organizers were using social networking sites like Facebook and Twitter to call for nationwide demonstrations.

``Today the Libyans broke the barrier or fear, it is a new dawn,'' said Faiz Jibril, an opposition leader in exile.

Opposition website Libya Al-Youm said four protesters were slain by snipers from the Internal Security Forces in the eastern city of Beyida, which had protests Wednesday and Thursday. It's not clear when the protesters were killed. The website also said there was a demonstration Thursday in Benghazi, Libya's second-largest city, and that security forces had shot and killed six people with live ammunition.

Switzerland-based Libyan activist Fathi al-Warfali said 11 protesters were killed in Beyida on Wednesday night, and scores were wounded. He said the government dispatched army commandos to quell the uprising.

Libya Al-Youm said that protesters set out Thursday after the funeral for those killed a day earlier toward the State Security building, chanting ``Free Libya, Gadhafi get out!''

Mohammed Ali Abdellah, deputy leader of the exiled National Front for the Salvation of Libya, said that hospitals in Beyida were complaining of a shortage in medical supplies, and that the government has refused to provide them to treat an increasing number of protesters.

Abdellah quoted hospital officials in the town as saying that about 70 people have been admitted since Wednesday night, about half of them critically injured by gunshot wounds.

Gadhafi's government has moved quickly to try to stop Libyans from joining the wave of uprisings in the Middle East that have ousted the leaders of Egypt and Tunisia. It has proposed the doubling of government employees' salaries and released 110 suspected Islamic militants who oppose him _ tactics similar to those adopted by other Arab regimes facing recent mass protests.

An autocrat who has ruled for more than 40 years, Gadhafi also has been meeting with tribal leaders to solicit their support. State television reported Tuesday that Gadhafi spoke with representatives of the Ben Ali tribe, one of Libya's biggest clans and one that has branches into neighboring Egypt.

Tripoli residents said they were having trouble accessing the Internet, although it was not clear whether access had been blocked or the bandwidth reduced. At the height of the protests in Egypt last month, the government shut down the Internet for five days in a bid to curb the protesters' ability to organize.

The official news agency JANA said Thursday's pro-government rallies were intended to express ``eternal unity with the brother leader of the revolution,'' as Gadhafi is known.

Witnesses in the capital said many government supporters were raising Libyan flags from their cars and chanting slogans in favor of Gadhafi. They said it was otherwise business as usual in the capital and stores remained open.

But protests already have turned violent.

Al-Warfali, head of the Libyan Committee for Truth and Justice, said two more people were killed in another city, Zentan, on Thursday while one protester was killed in Rijban, a town about 75 miles (120 kilometers) southwest of Tripoli, where power was shut down Wednesday night and remained off Thursday.

A video provided by al-Warfali of the scene in Zentan showed marchers chanting and holding a banner that read ``Down with Gadhafi. Down with the regime.''

He said protesters on Thursday in the coastal city of Darnah were chanting ``the people want the ouster of the regime'' _ a popular slogan from protests in Tunisia and Egypt _ when thugs and police attacked them from a vegetable market.

Another video showed protests by lawyers in Benghazi on Thursday demanding political and economic reform while a third depicted a demonstration in Shahat, a small town southwest of Benghazi.

The Libyan government maintains tight control over the media and the reports couldn't be independently confirmed.

Libya's Muslim Brotherhood, an opposition group in that country as it has been in Egypt, denounced the crackdown.

In a statement Wednesday night, it accused ``the security forces and members of the revolutionary committees of using live ammunition in dispersing the protesters.'' The group demanded that ``the Libyan regime rein in its (security) apparatus.'' 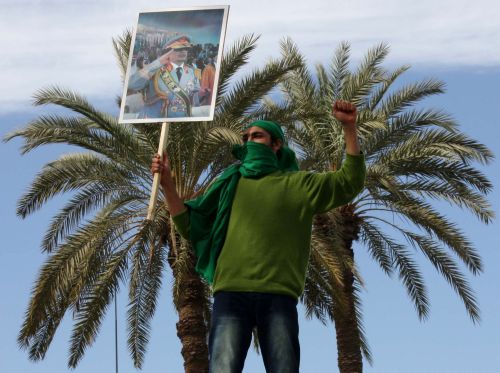 A Libyan pro-government supporter holds a portrait of leader Moamer Kadhafi during a gathering in Tripoli on February 16, 2011 to show support for the veteran leader who seized power in a 1969 coup, as Libya braced for a "Day of Anger" following revolts in neighbouring Egypt and Tunisia. (AFP-Yonhap)