The Seoul-based electronics firm said in a press conference that the current shutter glass panels have serious limitations such as flickering and cross talk ― blurry ghosting images ― that viewers have persistently complained of.

Noting the improvements, LG Electronics said 80 percent or more of the 3-D TVs it produces would be for its latest Cinema 3-D TV lineup.

It also predicted that its newest film-type patterned retarder technology, also known as FPR, would dominate the 3-D TV market. 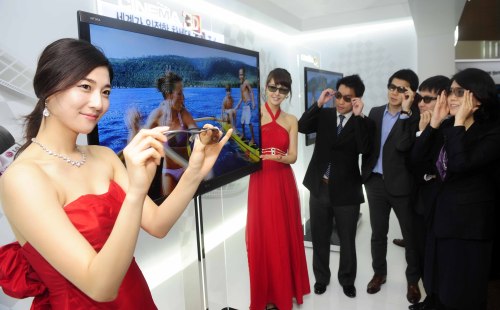 Kwon predicted that up to 80 percent of all 3-D TVs it plans to sell would use FPR technology.

The firm said its biggest focus was on creating a comfortable viewing experience.

“We have added the human factor to make sure that our products give our customers an easier and more convenient viewing experience,” said Ro Seog-ho, senior vice president of LG Electronics’ Home Entertainment division.

LG also said 90 percent of its LCD TVs will consist of sets using either 3-D or smart technology.

Another strong point of the film-type patterned retarder technology is in the special eyewear that all 3-D vision requires.

As LG’s latest 3-D lineup is able to completely realize 3-D vision without the aid of the glasses, which was the case with existing 3-D technology, customers will be able to see 3-D without the heavy, clunky glasses that shutter glass technology required.

The new glasses also do not require batteries and are aesthetically more pleasing and lighter in weight.

LG’s new 3-D lineup is to be sold globally within the first quarter of this year.

In total, the company hopes to sell around 40 million flat-panel TVs this year to secure a 16 percent market share and reduce the gap with top player Samsung.

In the high-end global TV market consisting of mostly smart TVs and 3-D TVs, LG is aiming to carve out a 20 percent share, Kwon said.