The jobless rate was 3.8 percent last month, down from 5 percent from a year earlier, according to the report by Statistics Korea. But it was up from the previous month’s 3.5 percent. 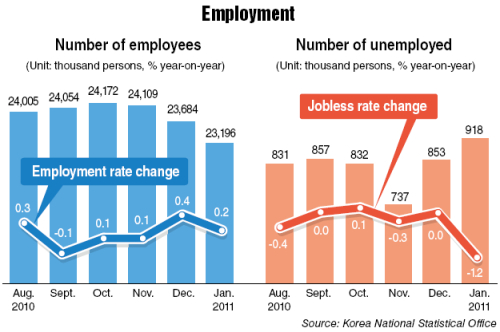 The number of working people stood at 23.19 million last month, up 331,000 from a year earlier, the report showed, keeping on-year job creation over the 300,000 mark for the fourth straight month.

The latest job data, however, offered mixed signals as unemployment remains significantly high among younger people. The seasonally adjusted jobless rate also inched up to 3.6 percent from 3.5 percent in December.

“Job growth continued mainly in the non-farm sector such as manufacturing, health and social welfare services, and science and technology,” the agency said in the report.

The manufacturing sector led the overall job creation by adding 224,000 positions. Health and social welfare, and science and technology areas added 189,000 and 78,000, respectively, the report showed.

A protracted cold spell, however, dampened recruitment in the agriculture and fisheries sector, which lost 104,000 jobs.

The number of people who remained out of work despite their efforts to find jobs fell to 918,000 from the 1.21 million tallied during the same month a year earlier, when the nation was still faced with the fallout from the global economic slowdown.

The latest job figures demonstrate that the private sector continues to increase hiring, a turnaround from the past few years when it remained reluctant to offer jobs amid uncertain business conditions, observers said.

The job market picture still remains bleak for many young people as unemployment among the age group is much higher than the headline rate.

According to the report, the jobless rate among people aged

15-29 surged to 8.5 percent last month from the previous month’s 8 percent, though it dropped from a year earlier, when it stood at 9.3 percent.

Job creation is a top priority for the government’s economic policies this year as the nation is still striving to achieve a sustained economic recovery.

The government said earlier that it aims to create 280,000 jobs this year.

For the target, the government has to achieve 5 percent economic growth and stabilize inflation at around 3 percent this year, outlooks that many experts see as “too optimistic” given the current economic conditions at home and abroad. (Yonhap News)