On dusty day in the desert when the wind reached 28 mph, Woods showed an uncanny ability to repeatedly rally.

He finished with a total of 7-under 209, behind second-round leader McIlroy (75), Denmark’s Anders Hansen (71) and South Africa’s Thomas Aiken (74). Woods is in a seven-way tie for fourth. 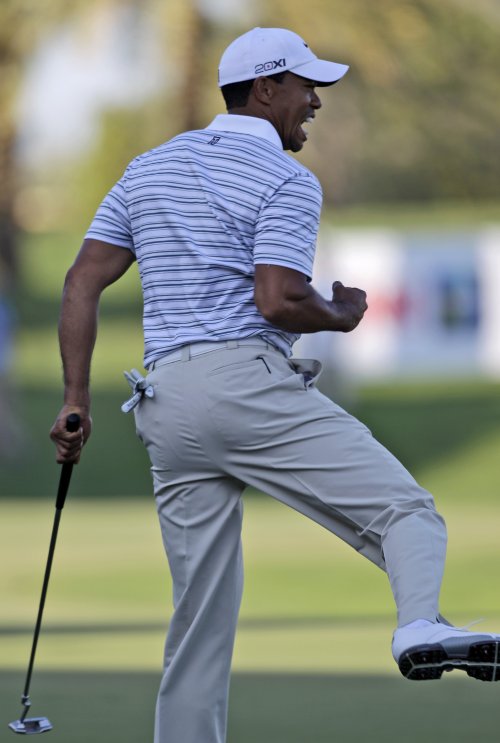 Tiger Woods reacts on 18th hole on Saturday.  (AP-Yonhap News)
In an uneven round, Woods had an eagle, four birdies, four bogeys and a double bogey.

“The fact I was able to battle from 4-over-par and put myself with a chance going into tomorrow, I’m proud of that,” Woods said. “Hopefully, I can build on that.”

Woods started badly with bogeys on the first two holes, mostly from errant drives that went well left of the fairway. He pulled a shot back on the third with a birdie. But he bogeyed the eighth and ended up with a double bogey on the ninth after his approach shot got caught up in the wind, dropped just short of the green and rolled in the water.

At the turn, Woods showed some of his trademark resilience. He responded with an eagle on the 10th, chipping in from 35 feet. He followed that with a birdie that seemed to settle him down. But after running off several pars, his putting woes returned with a bogey on No. 16 ― prompting Woods to swear before ending with “Come on, Tiger.”

The former top-ranked player pulled out all the stops on 17, driving to the back edge of the green on the 359-yard hole. But his chip ran past the hole and he missed an easy birdie putt.

He played cautiously on the 18th, choosing to lay up rather than drive the green. It paid off when he managed to curl in a 30-foot putt, prompting a fist pump as the gallery cheered.

“I just had to stay patient,” Woods said. “I made two mistakes with two bad swings at 8 and 9 that cost me four shots right there. I had three par 5s and 17 drivable.

”So I figured the back nine, I could make up some ground and hope the leaders did not pull away.“

Woods is seeking his first tournament victory in more than a year. He won in Dubai in 2006 and 2008.

McIlroy, who won his only European Tour event here in 2009, also had a dreadful start on a day when about two-thirds of the field didn’t break par. He had three straight bogeys to hand the lead to Garcia, including a drive on the second that landed in sandy scrub and one on the third that ended in the bunker.