At the same time fuel consumption has been reduced to 9.9 liters per 100 kilometers, an improvement of 32 percent compared to the predecessor model, according to the car maker.

A major contribution to the lower consumption figures is the 7-speed sports transmission, a component used exclusively at Mercedes-AMG. Unlike a conventional automatic transmission, the transmission does away with the torque converter; instead, it makes use of a compact, wet start-up clutch. 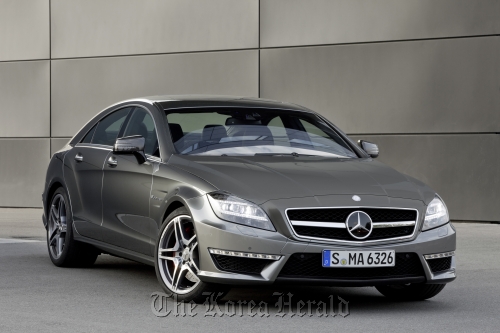 CLS 63 AMG
Also fitted as standard equipment is the stop/start function: it is permanently active in the transmission’s Controlled Efficiency (“C”) mode, and switches the eight-cylinder engine off when the car comes to a stop.

In addition lightweight construction makes a significant contribution towards addressing the classic conflicting goals of low weight and high strength. Like the SLS AMG, the CLS 63 AMG is also fitted with doors featuring a full aluminum construction. They consist of deep-drawn aluminum panels with extruded sections and are around 24 kg lighter compared with conventional steel doors.

In addition, the bonnet, front wings, boot lid, parcel shelf, various support sections as well as major parts of the chassis and engine are all made from aluminum.

From the exterior the radiator grille with its large Mercedes star and wing-shaped horizontal slats appears to have been inspired by the gull-wing. The top-of-the-range AMG model distinguishes itself from the other CLS variants with its distinctive bonnet, wider mudguards with “V8 BITURBO” logo and a specific AMG front apron with black painted cross member.

Eye-catching features at the rear include the diffuser insert, the AMG spoiler lip on the boot lid and the AMG sports exhaust system.