[ The Korea Herald – Send E-mail ]
Kitchens become chemistry labs as home chefs experiment
By 김후란
Published : Feb 11, 2011 - 18:04
Updated : Feb 11, 2011 - 18:04
WALNUT CREEK, California ― It sits on the plate, looking like a perfectly cooked, sunny side-up egg ― except the yolk tastes like spiced carrots and the white is made from coconut milk, with a side of sodium alginate and calcium chloride.

This edible trompe l’oeil is not some practical joke. The faux egg is a perfect example of molecular gastronomy, the esoteric culinary trend associated with such Michelin-starred chefs as Palo Alto, California’s Bruno Chemel and Spain’s legendary Ferran Adria.

But while this culinary-science crossbreed once was restricted to high-end restaurant kitchens and the occasional episode of “Top Chef,” now it is seeping into the realm of adventuresome home cooks, particularly those with a bent toward buzz-worthy entertaining.

Most cooks lucky enough to have an ISI cream whipper at home use the popular canister, powered by small gas cartridges, for sweet dairy products. But Powers, a San Mateo, California, home cook, uses his to make his go-to appetizer: pear slices with a reduced port sauce and blue cheese foam. 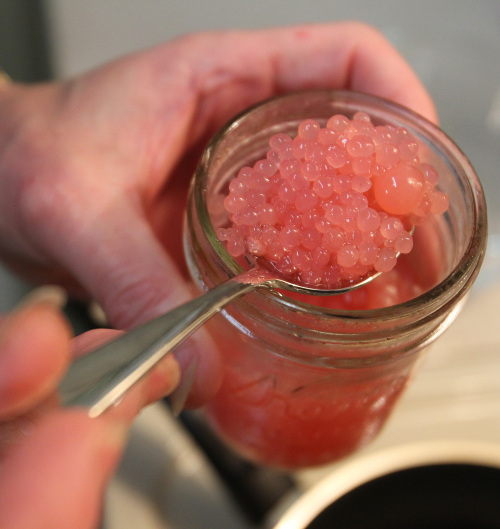 “If you have a whipper in the house,” he says, “you’re going to try to foam everything.”

By day, Powers is a business intelligence developer for Senturus. But at home, Powers is all about the cooking. He surfs the Internet for molecular gastronomy equipment, cookbooks and starter kits of powders for jelling, thickening and foaming. And he’s particularly proud of his fruit spheres and faux noodles.

“You don’t go to many dinner parties,” he says, “and have someone serve spaghetti and meatballs made out of strawberries for dessert.”

Molecular gastronomy is gaining such traction, Sur La Table has begun offering occasional classes in sous vide and other techniques. Their audience, says Anne Haerle, the corporate chef for the company’s cooking classes, is the same people who watch “Top Chef.” They’re seeking out instruction in low-temperature sous vide cooking and the how-tos for fruit caviar, spheres and other attention-getting tidbits.

Powers may put blue cheese in his whipper, but Haerle puts chocolate in hers. She calls it “sort of wonderful and dangerous all at the same time. You have chocolate mousse at will.”

Powers isn’t the only amateur molecular gastronome around, of course. But he’s typical of the adventuresome, tech-savvy cooks drawn to a cooking technique that bears more than a passing resemblance to chem lab.

And after sampling a particularly wonderful dish at Oakland, California’s Commis restaurant, he purchased “meat glue” ― transglutaminase ― online so he, too, could bond light- and dark-meat chicken into two-tone blocks. When it’s sliced, it’s stunning on the plate. Tasty, too.

Still, there’s a hefty price tag attached to some of this equipment. Powers covets the professional grade Anti-Griddle, which freezes a food’s exterior, leaving the interior creamy. It costs $1,160. Joh longs for a Pacojet, which slices and purees frozen mixtures into silky-smooth blends and runs about $4,000.

But some manufacturers have begun producing consumer versions of costly restaurant equipment, including a $500 home sous vide water oven. Wired Magazine’s recent list of the 100 best holiday gifts for geeks included one such temptation.

“As they become more affordable for home use, it could really change the landscape of how we cook in the home,” says Joh.

The Pacojet may be still out of reach, but Oakland, California’s Amory Schlender, a mathematical modeling consultant who built his own DIY sous vide, has come up with a perfect workaround. Scream Sorbet uses a Pacojet to achieve its sublime texture, he says. You can buy the results by the pint at Bay Area farmers markets and the company’s new storefront in Oakland. And a pint of coconut Thai basil or Anaheim pepper sorbet goes splendidly with sous vide.

1) Mix guava juice and algin with an emulsion blender. Load mixture into syringe.

2) Mix the cold water and calcic in a metal bowl to create a bath.