Questions are swirling over the mysterious boxes abandoned in the store located in the political and financial hub of Seoul. With experts claiming the modus operandi to be classic money laundering, rumormongers are gossiping that it is black money belonging to underworld gangsters or possible slush funds from political or financial moguls.

According to Yeongdeungpo police, the boxes were suspected to be explosives when first reported by staff at the warehouse on the 10th floor of the Yeouido Department Store. Warehouse operators had found the boxes to be unusually heavy when moving them and had reported them to the police. 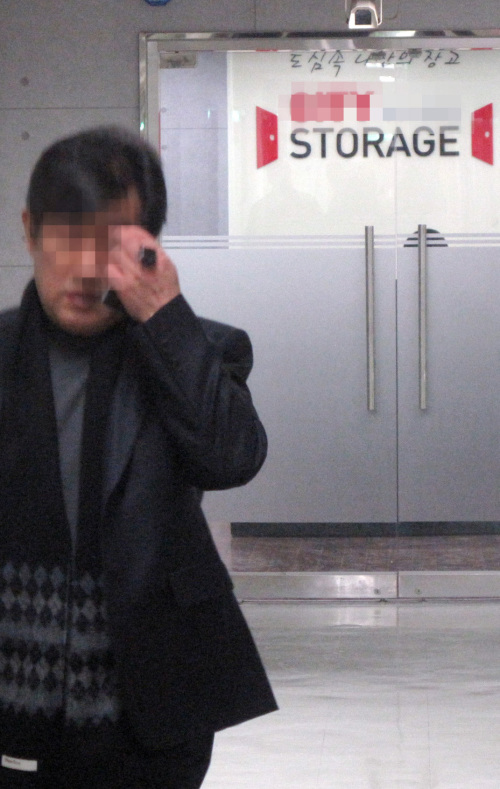 A warehouse of the Yeouido Department Store where 1 billion won in two boxes was found Wednesday. (Yonhap News)
After viewing surveillance camera footage, investigators said the client who had deposited the boxes was a man who looked to be in his 30s and about 174 centimeters tall. He paid 2 million won for one year’s storage on Aug. 25 last year under the family name of Kang.

The manager of the warehouse has reportedly tried contacting the person who deposited the boxes, but three of the phone numbers given turned out to be fake ― they were either borrowed names or out of service. His reported resident’s registration number did not exist either, the police said.

“It seems like whoever it is, the person who planned the storage was very much aware of the police tracking system and inside information on banks. He or she did not use paper bands and was clever enough to stack used notes rather than traceable new ones,” a bank insider told the police.

“I think the money was meant to be slush funds,” a police official said.

What will become of the money?

The police advised the warehouse to keep the boxes until Aug. 24, when the storage contract expires. The operators said they would store them for an additional three months, but then might adjust their usual policy to discard them.

“Of course now that they have found it was money, things may be different,” an official said of the investigation.

“It is true that the circumstances are quite fishy ― fake identification and fake contacts with a jaw-dropping amount of money. But there is no solid proof. The money will be for the owner,” the official said.

Conventionally, warehouse storage managers are bound to make an announcement searching for a client for 14 days within a year from the storage expiration date. Then ownership of unclaimed items is passed to the warehouse.

A local daily quoted a lawyer as saying that the money could be confiscated to state coffers.

“It is a lost item if the owner doesn’t show up,” he said.

But another lawyer said, “There is no evidence that the money is linked with any illegality,” taking the sides of the owner and the warehouse.