“Tabla has its own notes,” Asif Mahmoud says. “It speaks to us. It speaks from my heart. When I play tabla, I open my heart to listeners. Music is the language that speaks for the heart, for the soul.”

The 63-year-old Mahmoud keeps alive an ancient flame, an authentic Afghan culture that has managed to survive decades of war, grinding poverty and religious extremists who used to threaten to lynch musicians with their instruments.

Now the threats to the country’s fragile traditional arts come from a flood of high-tech pop from Tajikistan or the Persian Gulf as well as rising fear that the capital will become engulfed in violence once again.

Few pay much attention to Mahmoud or to Kharabat Street. Raw sewage trickles down the narrow roadway and trash fills the foundations of bombed-out buildings.

It was once among the most storied places in Central Asia. More than a century and a half ago, the Afghan monarch Emir Sher Ali Khan established Kharabat Street as Kabul’s music quarter, where those who entertained at the castle on the mountain ridge would live. On horseback they made their way up the slope to the castle, and then back down, night after night. 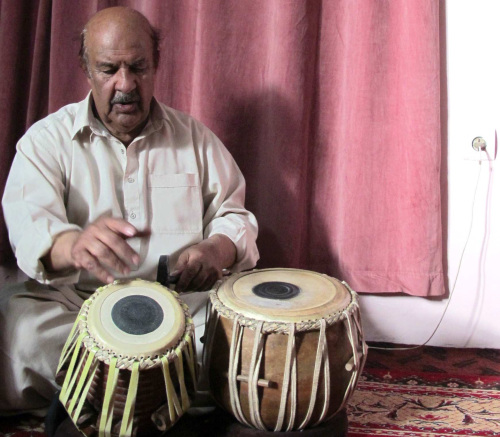 Asif Mahmoud plays the tabla at his Kabul, Afghanistan home and studio.(Los Angeles Times/MCT)
Artists, musicians, composers and instrument makers flocked here, living in mud-brick houses with courtyards. Indian tradesman lived nearby, giving the area a slightly cosmopolitan, anything-goes atmosphere. “I am a Kharabati and an admirer of wine,” went one poem.

Mahmoud began studying music when he was 8 and was quickly recognized as a prodigy. He won a scholarship to study in India, but returned to Kharabat just before Afghanistan’s major troubles began in the 1970s.

The musicians back then tried hard to tone down Kharabat’s reputation to make it more palatable to pious Islamic tastes. There were no night clubs, as there had been in previous decades. But there were decent restaurants where you could sit and listen to live music until 2 a.m. By day they performed live on the radio in broadcasts heard around the country.

“We could live a happy life with little money,” he recalls.

The 1980 Soviet invasion plunged much of the nation into a series of overlapping wars that have yet to end. But Moscow’s Communist elite were keen to be seen as promoters of Afghan culture. Mahmoud was flown several times to perform in Russia. Other musicians were invited to perform in East Germany and Poland.

“Music came to the spotlight and musicians were respected,” he says. “The Russians appreciated our music, theater shows and musicians.”

After the Soviets left, the Moscow-backed government of President Najibullah was also kind to musicians, bestowing gifts of flutes to the people of Kharabat. But dark days were coming.

Kharabat had long been viewed suspiciously by pious Afghans who forbade their children to study music and even beat Kharabatis, saying they were depraved enemies of God. There’s no such thing as “Afghan music,” they argued and still argue, or anything outside Islam in Afghan culture

Najibullah’s fall unleashed the fury of the Islamists. Once the mujahedeen dislodged him, “we lost everything,” Mahmoud says.

Mahmoud fled to India, where he stayed for two years before heading to Britain, where he lived for 18 years. In London, he performed concerts and was celebrated in newspapers such as the Guardian or the Evening Standard.

When he finally returned to Kharabat in 2003, it lay in ruins. Homes had been looted, squatters lived in makeshift encampments and wild dogs roamed the alleys. But Mahmoud was happy to be home again even if it meant leaving his six children, one of them a tabla player and another a singer, in London.

He sought to rebuild his old life and began performing on radio and television. They couldn’t pay him anything, but he drew a monthly stipend of $300 from the International Organization for Migration, a United Nations body that helps refugees.

He acknowledges that he could be earning a lot more money and living a much more comfortable life closer to his family in London, where he was paid $1,000 a night for a performance.

But he feels extraordinary here. When he walks through the streets people know him. And the dozen or so accomplished musicians and many more students trickling back to Kharabat acknowledge him deferentially as the “ustad,” the master of his trade, and kiss his hand out of respect when they greet him.