Ronaldo scored a tying goal in the 21st minute equalizer in Geneva, but the Real Madrid forward was upstaged by his Barcelona rival, who set up Angel Di Maria for a 14th-minute goal and then converted the penalty kick following a foul by Fabio Coentrao on Javier Pastore.

Karim Benzema scored for France in the 54th minute at Saint-Denis, the stadium where France beat Brazil 3-0 in the 1998 World Cup final. Brazil played a man short after Hernanes was ejected in the 40th minute for a challenge in which he kicked Benzema in the upper body. 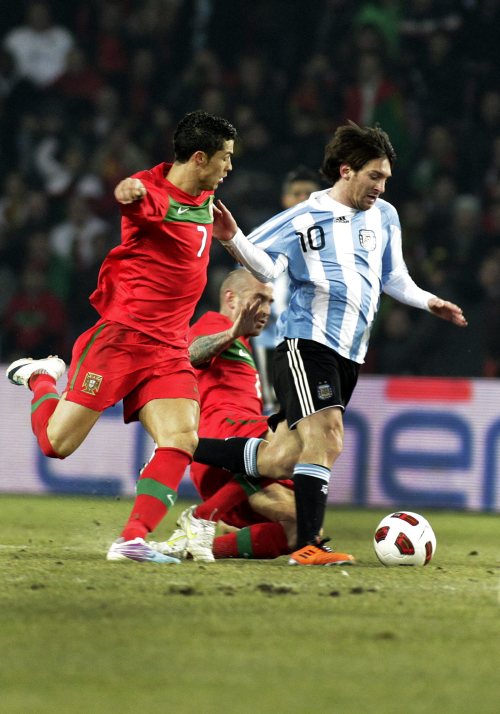 England defeated Denmark 2-1 on goals by Aston Villa teammates Darren Bent in the 10th minute and Ashley Young in the 68th. Liverpool’s Daniel Agger had put the Danes ahead in the eighth.

The United States’ game at Egypt was canceled following political protests there.

Messi’s goal was his 16th goal in 54 international appearances.

“We always enjoy seeing two great players on the same field,” Argentina coach Sergio Batista said. “I liked both of them tonight. Lionel was at a higher level.”

France won its fifth straight game and built on the 2-1 victory at England in November. Benzema’s goal was his 12th goal in 33 international appearances.

“The wins against England and Brazil should give us a lot more confidence individually and collectively,” Blanc said. “I hope we can use it in the future for the important (2012 European Championship) qualifiers coming up.”

Since beating the Netherlands in the World Cup final last July, Spain had played three exhibitions, a 1-1 tie at Mexico in August followed by a 4-1 loss at Argentina in September and a 4-0 defeat at Portugal in November.