CAIRO, (AFP) - Egypt's embattled regime warned of a military crackdown on Wednesday as massive protests demanding its overthrow spilled out across the country and deadly unrest flared in the remote south.

Hundreds of demonstrators marched on parliament from the epicentre of the uprising in Cairo's Tahrir Square the day after the largest protests since the revolt began, as other demonstrations erupted in cities across the country.

Foreign Minister Ahmed Abul Gheit warned the army, until now a respected and mostly neutral force on Cairo's streets, would intervene to protect the country if the protests against President Hosni Mubarak escalated.

"If chaos occurs, the armed forces will intervene to control the country, a step... which would lead to a very dangerous situation," the official MENA news agency said, paraphrasing Abdul Gheit's interview with Arabic-language satellite television channel Al-Arabiya.

His remarks came after newly appointed Vice President Omar Suleiman warned of a possible "coup" in the absence of a peaceful transfer of power.

Abul Gheit slammed the United States for "imposing" its will on Egypt by demanding immediate reforms.

"When you speak about prompt, immediate, now, as if you are imposing on a great country like Egypt, a great friend that has always maintained the best of relationship with the United States, you are imposing your will on him," Abul Gheit said.

Shortly after his comments, Washington renewed its calls on the Egyptian army to show restraint.

"We respect the role the Egyptian military has played so far, and we would encourage them to continue to show... the restraint that they have shown in recent days," State Department spokesman Philip Crowley said.

The protesters however showed no sign of backing down on their demand for Mubarak's overthrow as tens of thousands of people filled Cairo's Tahrir Square well into the third week of a revolt that could reshape the Middle East.

Around a thousand marched on parliament to demand its members' resignation, vowing to remain until the legislature -- widely seen as unfairly dominated by the ruling party -- is dissolved.

The night before they had been joined by several hundred thousand supporters for the biggest rallies yet in the two-week-old drive to topple the autocratic president and replace his 30-year-old US-backed regime.

On Wednesday, volunteers were building portable toilets, indicating the protesters have no intention of leaving the "liberated" square, now a sprawling tent city with sound stages, flag vendors and a mobile phone charging station.

In a sign the protests were widening beyond Cairo, unrest gripped the remote oasis of Kharga, where at least five people were killed and 100 wounded when security forces opened fire on demonstrators, a security official told AFP. 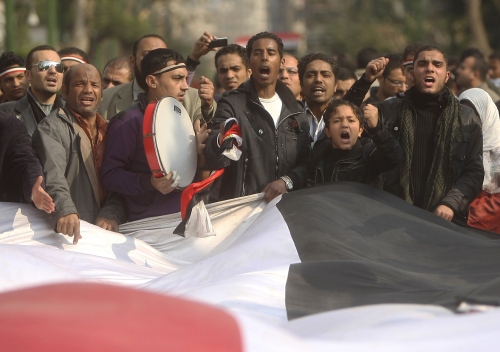 Egyptian protesters wave a giant banner in front of the Egyptian Parliament in Cairo, Egypt, Wednesday, Feb. 9, 2011. Around 2,000 protesters waved huge flags outside the parliament, located several blocks from Tahrir Square, where they moved a day earlier in the movement's first expansion out of the square. They chanted slogans demanding the dissolving of the legislature, where almost all the seats are held by the ruling party. (AP-Yonhap)

In the Suez Canal city of Port Said, some 3,000 protesters stormed a government building, torching office furniture and the governor's car.

In the southern town of Assiut, some 4,000 protesters blocked a railway with wooden planks and bricks and shut down a major highway with burning tyres.

Several smaller strikes broke out in Cairo and the Nile Delta to the north, where textile workers demanded higher wages and better conditions.

The 82-year-old Mubarak has charged Suleiman, his longtime intelligence chief, with drawing selected opposition groups into negotiations on democratic reform before elections due in September.

Some parties have joined the talks, but the crowds in Tahrir Square insist that Mubarak must go before they will halt the protest. Suleiman, however, warned that the transition must be slow and orderly.

"The second, alternative way would be a coup -- and we want to avoid that

Protesters in Tahrir said they were unmoved by Suleiman's remarks and vowed to remain in the square until their demands are met.

"He is acting as they've been acting with us for 30 years. The same talk, the same lies," said Neven al-Sergany, a 44-year-old teacher. "I don't think I will leave. The people here are so determined."

The Muslim Brotherhood, the country's best organised opposition group despite a half century of illegality, meanwhile moved to reassure observers who fear an Islamist takeover should Mubarak's regime be toppled.

"The Muslim Brotherhood does not seek power. We do not want to participate at the moment," senior leader Mohammed Mursi told reporters, adding that the movement would not field a presidential candidate.

The United States is watching events in the most populous Arab country with great concern, hoping the transition to elected rule can take place without a descent into violence, or an Islamist or military takeover.

White House spokesman Robert Gibbs said the government had yet to meet the "minimum threshold" of reform demanded by Egyptians.

Suleiman's proposed transition process "does not appear to be in line with the people of Egypt. We believe that more has to be done," he said, adding that it was not for the United States to dictate the shape of reforms.

In another sign the regime has not gone far enough, Culture Minister Gaber Asfour -- appointed just nine days ago in a cabinet shake-up prompted by the revolt -- resigned for "medical reasons."