The third “Concept Korea,” subtitled “Cultural Treasures 2011,” will open next Tuesday at the Lincoln Center for the Performing Arts in New York during New York Fashion Week, Feb. 10-17, according to the Ministry of Culture, Sports and Tourism on Tuesday.

The project aims to expand global recognition of Korean fashion designers and create business opportunities for them. Co-hosted by the Culture Ministry and Daegu Metropolitan City and co-organized by Korea Creative Content Agency and Korea Research Institute for Fashion Industry, it was initiated last February and took place during the past two New York Fashion Week seasons.

This time, four established brands ― Doho by Doho; Lie Sang Bong Paris by Lee Sang-bong; Steve J & Yoni P by Jeong Hyuk-seo and Bae Seung-yeon and General Idea by Choi Bum-suk ― have been selected to be featured in New York.

The designers will be showcasing a total of 40 pieces of their latest designs that feature the country’s traditional color of indigo blue, which fits the subtitle of the event, at the fashion show held at the Lincoln Center. The collections will also be exhibited in a showroom at Chelsea Market in the Meatpacking District for 10 days starting Monday. 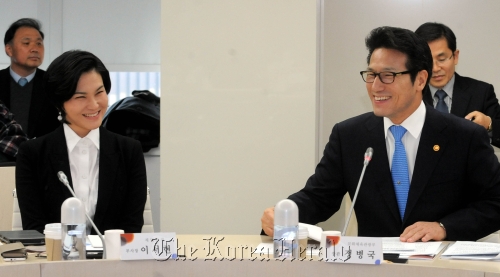 Lee Seo-hyun (left), vice president of Cheil Industries, and Choung Byoung-gug, culture minister, smile while attending the fashion forum held at the Cheil Industries building in central Seoul on Tuesday.  (Ahn Hoon/The Korea Herald)
The project, however, has raised disappointments as well as hope in Korea’s fashion industry during the past year due to its many shortcomings. Aware of the concerns, the Culture Ministry hosted a discussion on the project Tuesday at the Cheil Industries building in Seoul to figure out better ways to help Korean brands and designers gain foothold in the highly competitive global fashion market.

It was also the first official briefings given by the Culture Ministry since Choung took helm at the ministry. He chose the Cheil Industries building as the venue to emphasize that his tenure at the ministry will be field oriented. The occasion was also Lee So-hyun’s first public appearance since she was promoted to vice president of the fashion company last year.

The major issues raised during the discussion can be summed up to three needs: establish a fair and smart selection process that can pick out designers with the most potential, sort out overlapping projects hosted by different government organizations and set up a long-term plan.

Six designers were chosen for the first “Concept Korea” while eight were chosen and split into a group of three and five for the second and third versions of the project.

Park Choon-moo, a designer who participated in the first season, said she was disappointed and did not apply for the second one. And although she is an established designer in Korea, one-time support was not enough to pull up her brand to an international level.

“At first I found it very attractive that the government was helping us. It was a good start and we caught the media’s attention. But in reality, the individual support the designers received was so disappointing considering the total budget, perhaps because the government spent too much money on bringing famous foreign artists to collaborate with us,” Park told The Korea Herald.

“All we were able to do there was to hold a single exhibition, not a fashion show, all using the same mannequins. None of the designers could stand out and it was more like holding a group show. Meanwhile, I also sensed that there was one designer who was being favored. Anyway, the response there was not that enthusiastic.”

“Rather than choosing a big group of five to six at one time and dividing them into three sessions, it would be more helpful to select four or five and really focus on them. Mentoring programs will also come in handy,” said Lee Seo-hyun.

Until now, designers filed applications to be considered for “Concept Korea.” The Culture Ministry, however, said it will come up with other ways of selecting designers because domestically well-established designers are usually reluctant to participate in open competitions.

One of the ministry’s suggestions is that it would create a pool of designers instead of receiving applications, and select and support five among them for an extended period of time.

“We are going to go on two tracks; supporting the already established designers and also discovering new designers. We will go through the policy suggestions and come up with a clear screening process,” said Choung. The selecting process for the next project, which will take place in September, will soon commence.

“Concept Korea” is only one of the many government-led projects that aim to promote Korea’s fashion business overseas.

Many government organizations including the Culture Ministry, the Ministry of Knowledge Economy, Seoul Metropolitan Government and Daegu Metropolitan City have projects to propel the Korean fashion business into the international market.

The problem is that they are doing so without taking into consideration each other’s projects, often leading to overlapping investments.

“If we put together all of the budget the government organizations use to promote fashion, it will probably add up to over 10 billion won. But they are all overlapping investment, so we do not even know what they are spent on,” said Kim Cheol-woong, chairman of Seoul Fashion Artists Association.

Lee Gyeong-ho, head of the Ministry of Knowledge Economy’s Textile, Apparel & Consumer Goods Division, pointed out that the ministry hosted an exhibition on Korean textile and fashion in New York just two weeks ago and the culture ministry will be holding “Concept Korea” next week at the same city.

“This is an example of a case in which cooperation between different divisions and ministries are essential. In general, Ministry of Knowledge Economy covers industries and the Culture Ministry covers contents and hallyu. We could create a whole new level of contents if we cooperate and are linked from the planning stage,” said Lee.

The participants of the discussion remarked that a one-time and unstable project is inefficient and voiced the need to establish a well-organized long-term plan.

Designer An Yoon-jung said the government support should be more designer-specific.

“We need a policy that enables the government to support designers when they actually need it, while following their own plans for their business overseas. Projects like this can only establish credibility overseas when they are carried on for a long period of time,” said designer An Yoon-jung.

“I think there are about five to six years left until China will catch up on us in the soft contents area. This is a good time to start,” said Lee Seo-hyun.