President Lee Myung-bak reiterated during a televised talk show Tuesday that an inter-Korean summit would be possible if Pyongyang shows a sincere change of attitude.

“Six-party negotiations or inter-Korean talks can produce outcome only if North Korea changes its attitude,” Lee said, referring to the North’s past record of repeated provocations followed by what he calls “insincere” proposals for dialogue.

“I believe now is a good time for North Korea to change.”

Lee’s remarks were his first public response to Pyongyang’s latest peace overtures that followed deadly attacks on a South Korean naval ship and a civilian-inhabited border island. The North recently proposed defense ministerial talks with the South. The two sides have agreed to hold a working-level meeting next Tuesday to prepare for the high-level talks.

“(We) plan to start working-level dialogue and test (North Korea’s) seriousness (about the talks),” Lee said.

“If (North Korea) seeks sincere dialogue, rather than military provocations, we can have dialogue, resume economic exchanges and talks about the six-nation negotiations.”

When asked about the possibility of a reshuffle in his North Korea policy team to improve relations with Pyongyang, Lee said he had no such plans.

Lee discussed a range of issues in domestic politics, foreign affairs and economy with Hallym University of Graduate Studies professor Chung Kwan-yong and SBS-TV anchorwoman Han Soo-jin during the 90-minute program titled “Dialogue with the President: the Republic of Korea in 2011.” 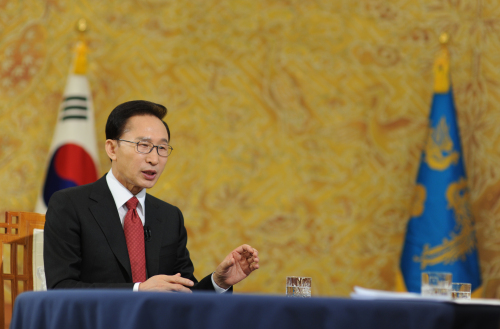 (Yonhap News)
The show was broadcast live from the presidential office of Cheong Wa Dae from 10 a.m. It was Lee’s first televised talk show to be held in his office.

Lee said Korea should amend its Constitution, which was last revised in 1987, to meet the new needs of a digital era and to reform the electoral system to root out political regionalism.

“It is something to be done by the National Assembly. Politicians should put the nation’s future above their partisan interests when discussing constitutional amendment,” Lee said.

“Much research has been done already, so this year won’t be late for discussions.”

As for the location of the 3.5 trillion won science-business belt, Lee said a committee to be launched by the prime minister under a special law will make a “fair” decision.

“Because it will be a national project that spans a hundred years, it should be discussed and determined by scientists,” Lee said.

Lee had promised to build the science-business hub in South Chungcheong Province during his presidential election campaign in 2007. He later hinted on reversing the pledge by saying it could “cause confusion.”

The main opposition Democratic Party calls for establishing the science-business belt in the Chungcheong region as planned, while some ruling Grand National Party lawmakers demand it be constructed in the southeastern province of Gyeongsang.

Regarding opposition parties’ criticism of his “revolving-door appointments,” Lee said he considers both efficiency and ethics when naming senior officials, but tends to put more emphasis on the former.

“I make judgments based on the person’s professional ability and teamwork. But my nominees never made it through the confirmation hearings when the hearing committee was headed by an opposition lawmaker,” he said.

“I believe the way parliamentary confirmation hearings are conducted should be revised.”

The president said he would like to meet with the leaders of ruling and opposition parties early this year.

As for the skyrocketing “jeonse” prices, Lee said the government is set to announce in late February a set of measures including encouraging construction companies to build small rental homes by providing them with low-interest loans.

Lee said the government also purchased 26,000 homes to provide for jeonse lease, Korea’s unique housing rental system under which a lump-sum deposit, instead of monthly rents, is paid to the landlord.

He also said the government is considering cutting taxes and tariffs on oil products in a bid to curb inflation.

“(The government) is reviewing whether to reduce taxes and import tariffs on a full scale to cover hikes in oil prices,” Lee said.

South Korea, which imports all of its oil demands, has been struggling to deal with the surging cost of oil products. It aims to achieve 5 percent economic growth this year while keeping inflation at 3 percent level.