“It is a big adventure to play baseball in Japan and it is a big chance as well. I’m very excited,” the 37-year-old South Korean veteran told a news conference in Osaka.

“After I played against Japan at the World Baseball Classic, I have become increasingly interested in Japanese baseball,” he was quoted as saying by Japanese media. 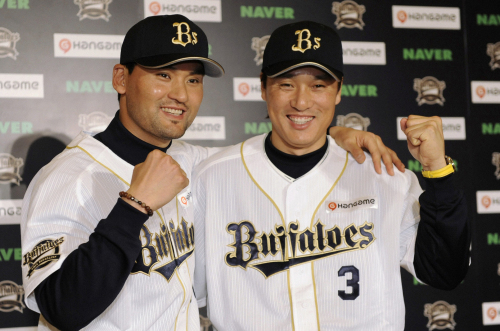 Korean stars Park Chan-ho (left) and Lee Seung-yeop pose with their new uniforms over the weekend. (Yonhap News)
“I want to learn a lot here,” said Park, who in 1994 became the first South Korean to join the major leagues.

They retained the title in 2009 by beating the Koreans in the final.

“I feel great pleasure and a sense of mission at the same time. My goal is to win first and foremost. Then I want to set my next goal,” he said.