That left him five behind Kang, who notched six birdies and an eagle in an eight-under par 64 on the North Course.

Kang, who closed out his round with back-to-back birdies to claim the lead, had a one-shot lead over Alex Prugh and 2010 Rookie of the Year Rickie Fowler.

Prugh posted seven birdies in his seven-under 65, including four in a row from the 15th to close his round while Fowler notched a total of eight birdies in his 65. 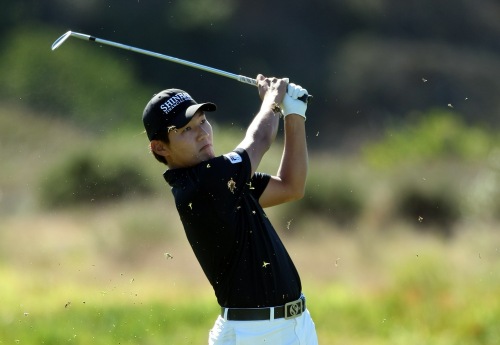 Sunghoon Kang of Korea hits off the 6th fairway during the first round of the Farmers Insurance Open at Torrey Pines on Thursday in La Jolla, California. (AFP-Yonhap News)
The North Course lived up to its billing as the easier of the two in use for the tournament, although changes to the layout have narrowed the difference in degree of difficulty compared to the South Course.

“I think it will probably be about two shots, maybe,” Woods said. “I think it has been as much as four here, maybe four-plus in some years. Not this year. It’s just too fast, too dry.”

All of the top four players on the leaderboard played the North Course, while the 67s of Mickelson, Daly and Gomez were the lowest scores posted on the South.

Woods, who is seeking a return to the form that made him the game’s most dominant player, said he was happy with his swing but regretted his inability to capitalize on the par-fives.

“I’m happy with the way I played, absolutely,” Woods said. “It could have been a lot better if I took care of the par-fives a little bit more, but obviously I didn’t do that.

“So hopefully on the South course I can take care of the par-fives and put together a little bit better round,” added Woods, who won the title here from 2005-2008 all after middling first rounds.

Kang, meanwhile, played the par-fives in four-under - jumpstarting a round that began on the 10th tee with an eagle at the par-five 14th.

“I hit driver down the fairway and I had 220 to the pin,” Kang said. “Tried to hit a little cut shot out with my hybrid and it just landed right next to the pin and went over the green a little bit and I just chipped it in from there.”

Birdies at the par-five 18th and par-five sixth were among the six birdies that saw the 24-year-old from Jeju top the leaderboard in just his second US tour event.

“All the par-fives are reachable,” Kang said. “I really tried to keep to the fairways and it worked really well. I really had good chances on par-fives, I made two birdies and one eagle ... that’s why I played very well today.”

Kang, who earned his tour card with a tie for 16th at qualifying school, led a youthful leaderboard. Fowler turned 22 in December, Prugh is 26 and the 25-year-old Kirk is a graduate of the Nationwide developmental tour.

But the group at 67 also included some veteran talent in Mickelson and Daly. Reigning Masters champion Mickelson posted the last of his three US tour wins at this event in 2001, while Daly’s 2004 triumph makes him the last player to win at Torrey when Woods was in the field.

“It seems a long time ago,” who missed the cut here last year and stomped off the course saying he was “done,” a remark thought by many to indicate he would retire.

Instead Daly has persevered.

“You get frustrated,” he said, but added: “This place means a lot to me.

The top golfers play here every year ― that says something. It’s a special place.”

Those top golfers are now chasing Kang, but the unassuming leader said he still thinks of the likes of Woods and Mickelson as teachers rather than competitors.

“I don’t really try to beat them or something. I’m trying to learn from them all the time,” Kang said. “I don’t want to put any pressure on me, so I’m really just trying to have fun.”