In 2000 Todd Thacker came to Korea to pursue a graduate degree in Confucianism in Busan.

Ten years later, the Ottawa-native is the managing editor of the Jeju Weekly, the island province’s only English-language newspaper.

How did this happen? It wasn’t so much that he didn’t succeed in his primary goal ― he obtained his master’s degree ― as that his plans evolved, starting when he went to work for The Korea Herald in Seoul in 2002.

“I had no intention of being a journalist,” Thacker, now 40, said last week. “I just sort of fell into it, happily so.”

For the next year and a half Thacker would edit on the paper’s business and culture sections, and build a passion for the profession that no other line of work has been able to satisfy.

When he moved on, it was to South Korea’s own OhmyNews.com in March 2004, just one month after the citizen journalism innovator started its international edition. Though its English edition is now defunct, Thacker remembers its early days as heady times, as his editing services were put to work assisting citizen reporters from all over the world. 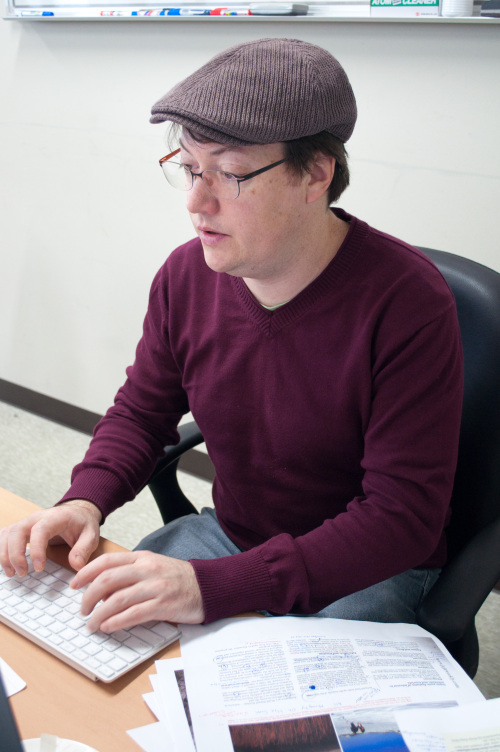 Todd Thacker, managing editor of the Jeju Weekly, works on the layout of the island province’s only English-language newspaper. (Jeju Weekly)
“It was well-known as an example of how citizen journalism can be done successfully,” he said. “You get a wide range of voices. There were professionals in Nepal, and amateurs in Brazil ... they’re all trying to tell their stories. They all need editors.

“I never knew what I was going to get, whereas with The Herald I knew it was going to be a Korea-related story.”

OhmyNews.com’s Korean-language site remains in operation, but in the second half of last year OhmyNews International’s page stopped accepting new material, existing solely as an archive for reporting published there from 2004-2010.

To hear Thacker tell it, though, the fire for citizen journalism had died down even earlier, which is why he temporarily left the news to work in a social-media startup in mid-2009. He worked on using social media such as Twitter to make online shopping easier here, which he found exciting in the sense that Twitter was still a concept most Koreans were getting used to.

After a year and half, and with a contract negotiation ahead and a hunger to get back into print, he was offered the chance to head to Jeju.

“Professionally, it’s just rewarding to have produced something that’s distributed and read and mulled over. You really feel like you’ve done something,” he said, adding that print offers something that even Internet news can’t quite match.

“You can hold it in your hand,” he said.

The Jeju Weekly (which actually prints every two weeks) had already been running for some time, having been founded by the husband-and-wife team of Jeju National University professor Kim Gyong-ho and publisher Song Jung-hee.

But with Thacker’s arrival, the publishers would have the opportunity to put the island province’s only English paper in the hands of an experienced editor, while Thacker relished some new chances of his own.

One was to return to the field, but others were more specific to the island itself; namely a clean, educated and media savvy environment for Thacker to live with his wife and now 5-month-old daughter.

The Jeju Weekly publishes not only the online and print editions in English, but also a monthly Chinese-language paper and a monthly on meetings, incentives, conferences and exhibitions in Korean, English, Chinese and Japanese.

Thacker declined to give an exact figure for its circulation, but said it’s in the five-figure range and mailed to about 70 countries. “Unlike most newspapers we’re actually growing,” he said.

Thacker is managing editor of a publication that has no staff reporters of its own, but calls upon the services of about 20 contributors, many of whom are English teachers with writing or reporting experience, and many that he considers very talented. Still, he quickly found his experience with OhmyNews International to be key, not only in editing but in helping contributors grow as writers and reporters.

The next issue of the Jeju Weekly will print on Jan. 28. In the future, he hopes to see it published once a week, but that’s one of many goals he has for the publication.

They include finding at least one, but preferably two experienced staff reporters who speak both Korean and English. He hopes to see a time when its contributors are a near-even mix of native English-speakers and Koreans writing in English. Furthermore, he hopes to see the paper serve the wide variety of foreigners on the island.

“I’m not targeting just English teachers,” he said. “I think we should also work hard to give a voice to migrant workers.”

As for his own future, Thacker can’t say that his daughter’s education won’t one day pull him off the island, but for now he thinks of it as home.

“People call Jeju Korea’s Hawaii,” he said. “I like to think of it as Korea’s Canada.”