Choo was among 119 players who filed for arbitration on Saturday, according to Major League Baseball. The left-handed outfielder received $461,100 last year, slightly above the major league minimum, while putting together his second straight season of at least .300 batting average, 20 home runs and 20 steals. In 2010, Choo set career highs with 22 home runs, 90 runs batted in, 22 steals and .401 on-base percentage.

Choo and his agent Scott Boras had been negotiating with the Indians for a raise, but Choo will have to seek his raise either in settlement or at the arbitration hearing next month.

If the team and the player can’t settle, hearings will be held between Feb. 2 and 19. Choo would be the first Indians player to take the club to arbitration since 1991. 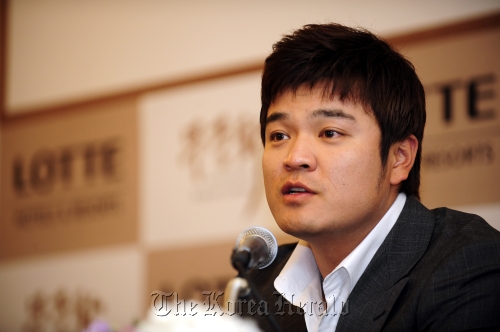 Choo Shin-soo.(The Korea Herald)
During a typical session, each side presents its case on why the player deserves the requested amount of salary, based on the player’s contribution to the team, the team’s record and attendance, and the salaries of comparable players.

Choo made his major league debut in 2005 with the Seattle Mariners, but didn’t become a regular until the second half of 2008, then with the Indians. Players with at least three years and fewer than six years of service in the majors are eligible for arbitration.

Boras has reportedly been seeking a series of one-year deals until Choo becomes a free agent after the 2013 season. But the Indians have been trying to lock him down with a long-term contract beyond 2013, without risking losing Choo to free agency.

The logic on the player’s side is that Choo, in the prime of his career at 28, could see his stock continue to rise over the next three or four seasons and could earn more money by signing a free agent deal in 2014 than by agreeing to a long-term deal now.

If the Indians refuse to pay the amount determined at the hearing, then Choo will become a free agent.

Choo has been reportedly seeking an annual salary of $3 million to $4 million. The Indians’ payroll in 2010 was just over $61.2 million, 24th among 30 major league teams.

Others who filed for arbitration included two reigning most valuable players from the American and National leagues ― Josh Hamilton of the Texas Rangers and Joey Votto of the Cincinnati Reds. (Yonhap News)